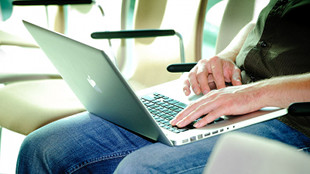 A website launched yesterdat (April 30) indexes happiness on Twitter by tracking individual words in user tweets. Researchers have compiled happiness scores for every day since September 2008. The day of the Boston Marathon bombings last month, April 15, ranked the lowest on the scale of any day yet tracked.

“Reporters, policymakers, academics—anyone—can come to the site and see population-level responses to major events,” Chris Danforth, one of the index’s creators and a professor at the computational story lab at the University of Vermont (UVM), said in a statement.

The index is based on strategies and computer programs developed for a study UVM researchers published in 2011. The researchers gathered the most commonly used words from Google books, The New York Times, music lyrics, and Twitter, compiling a list of 10,000 words. They then paid workers through the Amazon’s remote labor force website...

The day of the Boston bombings, which received a “happiness average” of 5.88, negative words like “sad,” “sick,” “explosion,” “victims,” and “tragedy” predominated, though words like “prayers” and “love” were also common. The day of the Newtown shootings, December 14, also ranked notably low on the index, as did the day of the 2011 earthquake and tsunami in Japan and the day in 2009 that Michael Jackson died.

Happy events were more predictable, with Christmas the “happiest” day of each year, scoring as high as a 6.37, and Thanksgiving, Valentine’s Day, and other holidays also making regular appearances near the top of the chart.

The index cannot divine context, however. For instance, it counted “kids” and “children” as positive words the day of the Newtown shooting. But the authors said that with its large sample of words and Tweets, it should be able to offer a general indication of the ups and downs of collective emotions.

The researchers hope to track entire phrases in later versions, which should help contextualize Twitter comments. They will also analyze Google trends, bit.ly links, and the BBC website to measure the happiness content of what people are reading and posting on the Internet.