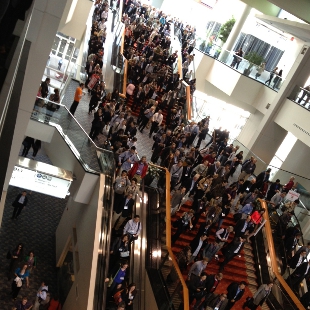 This year’s meeting of the American Association for Cancer Research (AACR) was the biggest yet, drawing thousands to the nation’s capital just as the cherry blossoms were peaking. Discussions touched on the role of the tumor microenvironment in disease progression; the potential to engineer a better immune response to fight cancer; and the need for whole genome sequencing and real time data sharing of results to make strides in understanding this heterogeneous disease. Harold Varmus, director of the National Cancer Institute, put it best in his special lecture on Monday morning (April 8), just prior to a boisterous rally for biomedical research funding:

“We know that progress has been great, and I believe that, while we...

Battle over bees and pesticides

WIKIMEDIA, LUIS MIGUEL
BUGALLO SANCHEZThe ongoing debate between researchers, politicians, and industrialists on the potential harm pesticides called neonicotinoids (neonics) are causing pollinators has heated up in the last few months, as governments propose temporary bans and the Environmental Protection Agency (EPA) gets sued for failing to protect pollinators from two neonicotinoids. Indeed, research is stacking up against the pesticides for affecting bees’ health and behavior, and with the pesticide industry fighting to keep neonics on the market, tempers are growing short.

Reconstruction of an embryonic dinosaur inside an eggD. MAZIERSKIJurassic embryos uncovered in southern China a few years ago have proven a valuable resource for paleontologists, who have pieced together new information on the size and growth rates of these sizable organisms. “Embryonic bones of any fossil taxon are rare, and these show that [embryonic dinosaurs] grew at rates comparable to birds and mammals and much faster than other reptiles do,” Kevin Padian, a palaeontologist from the University of California, Berkeley, told The Scientist.

The role of social media in conservation

WIKIMEDIA, FACEBOOK.COMLahiru Wijedasa of the Singapore Botanic Gardens and Gopalasamy Reuben Clements, a PhD candidate at James Cook University, discuss how issues that affect people on an immediate, emotional level, such as animal abuse, are more likely to attract attention among the social media crowd than longer-term issues, such as deforestation and poaching.

Penises: The Bigger the Better?

Female preference may have driven the evolution of human males’ relatively large genitalia.

A former University of Washington researcher did commit misconduct 10 years ago, according to the Office of Research Integrity.

Sir Robert Edwards, whose research led to the birth of the first test tube baby, has died at age 87.

Gut bacteria digest L-carnitine, a nutrient found in red meat, and produce a heart-harming molecule as a result.

Ailing Cape Cod marshes are recovering with the arrival of European green crabs.

Academic research universities and cancer centers will have a large hunk of their funding cut because of the government sequester.