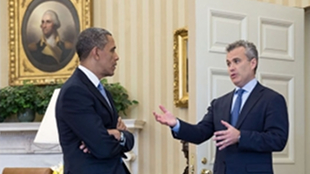 President Obama released his proposed budget for the 2014 fiscal year earlier this week (April 10). It has some scientists cheering, but others are disappointed. According to The Chronicle of Higher Education, overall Obama is proposing to increase science spending. The new budget includes $33.2 billion in total for basic science research (up by 4 percent over the fiscal year 2012 budget) and $143 billion for research and development (up by 1.3 percent since 2012).

The White House compared the proposed 2014 budget to the 2012 budget because effects of spending cuts to the 2013 budget due to sequestration are still being calculated. Obama said during his announcement of the budget that he hoped it would help ease the “foolish across-the-board spending cuts” of the sequester.

The National Institutes of Health (NIH) is receiving a small budget increase of 1.5 percent. “Everything’s relative,” NIH director Francis Collins said after a press briefing, according to ScienceInsider. “Considering what we've been going through in FY ’13, what’s being proposed here is really gratifying.” The money will help support the BRAIN initiative, a newly announced brain mapping project.

The Centers for Disease Control and Prevention (CDC), meanwhile, is seeing its funds fall by $270 million to a total budget of $6.6 billion. Funds for prevention of chronic disease and public health preparedness are down. However, more money is proposed for fighting zoonotic disease and to the Advanced Molecular Detection Initiative, which aims to use gene sequencing and other techniques to speed up characterization of pathogens. Obama’s budget also includes increased money for injury prevention and control, including research into preventing gun violence.

Another loser is the Environmental Protection Agency. Its research program funding will decline by 1.9 percent, including drops in funding on drinking water and endocrine disruptors. However, research funding for fracking and climate change will increase slightly. And the Department of Energy’s Advanced Research Projects Agency-Energy (ARPA-E) will see a 38 percent budget increase to $379 million for developing clean energy technology.

NASA’s budget will stay about the same but will include funds for lassoing an asteroid and towing it to the moon to study.

In general, the response of the science community has been positive. “The President’s budget offers hope that the nation will continue to make science and education investments a top national priority while taking serious steps to reduce budget deficits,” Hunter Rawlings, President of the Association of American Universities, said in a statement.

But perhaps more important is the reaction of Congress, which will have to pass the budget. Lamar Smith, a Republican representative from Texas and chair of the Science, Space, and Technology Committee of the US House of Representatives, was unimpressed, complaining that the plan to lasso an asteroid was unevaluated and that subsidies for green energy were a waste.