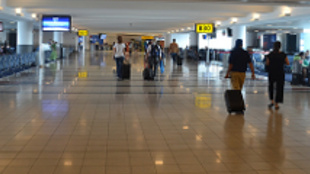 Travelers in New York City's John F. Kennedy International AirportFLICKR, DANIELOn Monday (May 12), the US Centers for Disease Control and Prevention (CDC) announced the second lab-confirmed case of Middle East respiratory syndrome coronavirus (MERS-CoV) infection in the country: a health-care worker who lived in Saudi Arabia and traveled through five international airports before arriving in Orlando earlier this month. The very next day, the World Health Organization (WHO) convened the fifth meeting of the International Health Regulations Emergency Committee concerning MERS-CoV to discuss the potential public health threat.

The committee, along with three expert advisers, concluded that while the “seriousness of the situation [has] increased in terms of public health impact, . . . there is no evidence of sustained human-to-human transmission” at this time, according to a WHO statement.

Beyond Saudi Arabia, the country in which MERS-CoV is thought to have originated and where most...

Cautioning against the possible exportation of the coronavirus to other vulnerable nations, the Emergency Committee urged WHO member states to take steps to improve their infection prevention and control measures, to enhance public awareness of MERS-CoV, and to “initiate and accelerate critical investigations, including case-control, serological, environmental, and animal studies, to better understand the epidemiology, especially risk factors and assess the effectiveness of control measures,” according to the WHO statement.

According to the Chicago Tribune, the Transportation Security Administration is posting MERS warning signs at 22 major U.S. airports at the CDC’s request. “The warning notes that the risk to most travelers is low but that people who get sick within 14 days of being in the Arabian Peninsula should call a doctor,” the Tribune noted.