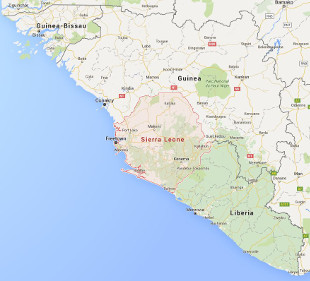 GOOGLE MAPSForty-two days have passed “since the last person confirmed to have Ebola virus disease [in Sierra Leone] had a second negative blood test,” the World Health Organization (WHO) reported this weekend (November 7), suggesting the country is now Ebola-free. Since May 2014, of 8,704 people infected with Ebola in the country, 3,589 died, the WHO noted in a statement. Like its neighboring country Liberia, which the WHO declared free of Ebola transmission for a second time in September, Sierra Leone has entered at 90-day surveillance period.

“WHO will maintain an enhanced staff presence in Sierra Leone as the response transitions from outbreak control to support enhanced vigilance and to the recovery of essential health services,” Anders Nordström of WHO said in the statement.

Responding to the WHO’s declaration, Tunis Yahya of the nation’s Ebola Response Center told The New York Times, “It’s kind of like a...

According to a November 4 WHO report, Guinea confirmed one new case of Ebola in the week ending November 1. Transmission of the virus continues to slow in the country, the WHO reported, with five or fewer confirmed cases per week for the last 14 weeks on record.