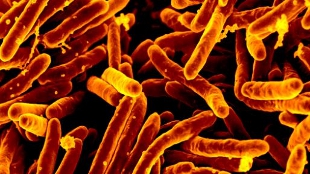 Mycobacterium tuberculosis, the bug that causes TBWIKIMEDIA, NIAIDTuberculosis (TB) is causing more infections and deaths the world over than previous estimates indicated, according to a new survey released by the World Health Organization (WHO) today (October 22). The WHO’s “Global Tuberculosis Report 2014” stated that in 2013 there were 9 million new cases of TB reported in the more than 200 countries that account for more than 99 percent of the world’s TB cases.

The number of reported cases this year is 400,000 more than the WHO estimated in last year’s report, but the increased numbers may indicate improvements in diagnosis and data reporting as well as unchecked spread of the disease. “There has been some real progress, particularly in Asia, but the overall situation remains catastrophic,” Richard Chaisson, director of the Johns Hopkins Center for Tuberculosis Research in Baltimore, Maryland, told ScienceInsider. “Improvements in some...

TB kills hundreds of thousands of people every year—an estimated 1.5 million people died from the disease in 2013, according to the WHO report—second only to HIV among infectious diseases.

Some infectious disease activists are criticizing the WHO report for being overly optimistic. “On the HIV side, we're doing stuff almost twice as fast in [reducing] deaths and multiple times as fast in incidence, even though TB is curable and HIV is not,” Mark Harrington, executive director of the New York City–based Treatment Action Group, which lobbies for stronger efforts to address both HIV and TB, told ScienceInsider.