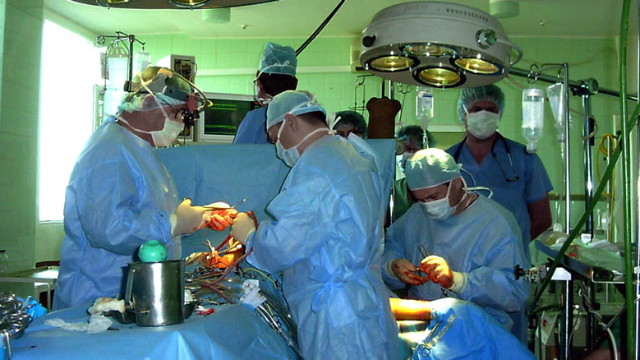 WIKIMEDIA, ION CHIBZIIOpen heart surgery is linked to better patient outcomes when carried out in the afternoon, rather than in the morning, according to a study published yesterday (October 26) in The Lancet. The reasons have to do with circadian rhythms, and the risk of heart damage following operation, researchers report.

“Our study found that post-surgery heart damage is more common among people who have heart surgery in the morning, compared to the afternoon,” says coauthor David Montaigne of the University of Lille, France, in a statement. “Our findings suggest this is because part of the biological mechanism behind the damage is affected by a person’s circadian clock and the underlying genes that control it.”

In an observational study of nearly 600 people receiving heart valve replacement surgery from January 2009 to December 2015, the team identified a 50 percent lower risk of heart failure or another cardiac event in people operated on in the afternoon, instead of in the morning. A one-year, randomized controlled trial of 88 patients that concluded last...

To understand the mechanisms responsible for the findings, the researchers analyzed 30 tissue samples from a subgroup of patients in the most recent trial, and found that afternoon surgery samples were quicker to regain the ability to contract when put in conditions mimicking blood filling back into the heart. These samples also revealed differential expression of 287 circadian clock-related genes between morning and afternoon samples.

In a subsequent mouse study, the team showed that using experimental drugs to reduce the activity of one of the genes expressed at higher levels in the morning could reduce the risk of heart damage following surgery. Study coauthor Bart Staels of the University of Lille tells STAT that “one could imagine, quite rapidly, a pharmacological approach that could basically wipe out the effects between morning and afternoon.”

From a biological point of view, the results are “not hugely surprising,” John O’Neill of the UK Medical Research Council’s Laboratory of Molecular Biology tells the BBC. “Just like every other cell in the body, heart cells have circadian rhythms that orchestrate their activity. Our cardiovascular system has the greatest output around mid/late-afternoon, which explains why professional athletes usually record their best performances around this time.”

Although hospitals can hardly eliminate morning surgery altogether, the authors suggest that patients with complicating conditions such as obesity and type 2 diabetes be prioritized for afternoon operations. “We don’t want to frighten people from having surgery—it’s life saving,” Staels tells the BBC. But “if we can identify patients at highest risk, they will definitely benefit from being pushed into the afternoon and that would be reasonable.”