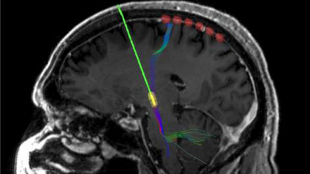 During surgery to implant a permanent DBS device (green with yellow tip) in the brain of a Parkinson’s patient, six recording electrodes (red) were temporarily placed on the surface of the brain. COURTESY OF CORALIE DE HEMPTINNEStimulate the brain of a patient suffering from Parkinson’s disease (PD) via a surgically implanted electrode and there’s no mistaking the results: the person’s slow movement, tremor, and/or rigidity—common symptoms of the neurodegenerative disorder—all but disappear immediately. When the device is turned off, the motor symptoms return in full force. But how deep-brain stimulation (DBS) effects such changes has been unclear.

In a study published yesterday (April 13) in Nature Neuroscience, researchers at the University of California, San Francisco (UCSF), uncovered evidence to suggest that DBS works by reducing the overly synchronized activity of the motor cortex, which controls the body’s skeletal muscles.

Whether this reduction in synchronicity is the cause of DBS’s potent effect on Parkinson’s symptoms remains to be seen, however. “There are many biological changes that have been associated with deep brain stimulation,” University of Florida neurologist Michael Okun, who was not involved in the study, told MIT Technology Review. While synchronization of brain rhythms could be one factor, “we should be very cautious about overinterpretation.”

To better understand what’s going on during DBS treatments, Starr’s group has teamed up with medical device company Medtronic to implant DBS devices that can simultaneously record activity in the motor cortex, allowing the researchers to collect long-term data on how DBS affects brain activity. “Now we can try to find even better correlations between DBS and symptoms, and we can even look at the effects of medications,” de Hemptinne said in the release. “This new ability to collect data over a longer time course will be very powerful in driving new research.”