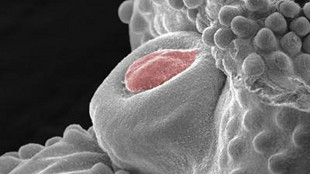 Males of species that practice internal fertilization generally use phalluses to insert gametes into females’ reproductive tracts. But 97 percent of bird species have lost the ability to grow a penile structure capable of penetration over the course of evolution. They mate instead by rubbing together small openings called cloacae, in a maneuver called a cloacal kiss. Reported in a study published yesterday (June 6) in Current Biology, researchers have identified a gene responsible for repressing the development of phalluses in bird species.

Martin Cohn, a developmental biologist at the University of Florida and an author of the study, told Nature that his team expected to find that birds lacking a phallus were missing important genes that stimulated phallus growth. Instead, after comparing the phallus-less birds to the well-endowed species, his team found that birds without phalluses had all the genes necessary for phallus growth but were expressing a gene call Bmp4 that caused programmed cell death of phallus cells during development.

Another theory is that sexual selection helped drive the loss of the phallus. Female birds may mate more willingly with males without phalluses, since they are less capable of unwanted advances and thus give female birds more choice in which males father their young.