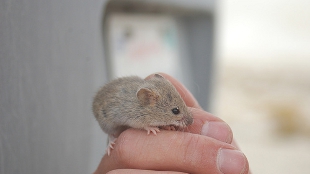 FLICKR, TODD HUFFMANThe gentle touch that calms pets can be traced to a genetically single, genetically tractable neuron, researchers from the California Institute of Technology reported this week (January 30) in Nature.

Researchers have known that a specific subset of neurons, sometimes called CT afferents, were responsible for conveying pleasant or anxiety-producing senses.  But no one had found the molecular marker for these nerves, nor been able to link them directly to behavior. By creating a window into a living mouse and genetically labeling the neurons they suspected were involved, researchers were able to see specific neurons light up when then mouse was stroked with a paintbrush.

The findings “imply that social touch is not simply nice, but that it has calming power in the context of something less-than-wonderful,” India Morrison, a neuroscientist at the University of Gothenburg in Sweden, told ScienceNOW.

(Read more about pleasant touch in our September 2012 feature “Pleasant to the Touch.”)