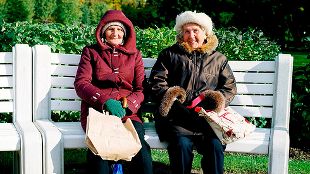 Flickr, Tanel TeemuskOur ability to judge the trustworthiness of faces diminishes with age, as does activity in the brain region associated with “gut feeling” decisions about the appearance of others, which could explain why older people are more vulnerable to face-to-face financial scams, according to a study out this week (December 3) in the Proceedings of the National Academy of Sciences.

According to the Federal Trade Commission (FTC), up to 80 percent of scam victims are over the age of 65. To find out why, psychologist Shelley Taylor at the University of California, Los Angeles, showed photos of faces pre-rated for trustworthiness to a group of 119 older people (ages 55-84) and 34 young people (ages 20-42).

Both groups perceived faces pre-rated as “trustworthy” or “neutral” as equally trustworthy, but the older group considered “untrustworthy” faces significantly more trustworthy than the young group did. The older people missed...

Then the researchers asked 44 volunteers to rate faces for trustworthiness as they underwent functional magnetic brain imaging (fMRI). They found that younger adults showed higher activity in the anterior insula, a brain region associated with “gut feeling” decisions. Older people showed little or no activation in this brain area, suggesting that they don’t get the signals that would warn about a scammer.

“[The older adults'] brains are not saying ‘be wary,’” Taylor told Nature. “They are not getting the ‘uh-oh!’ signal that younger people get.”

More work is required to determine whether decreased activity in the anterior singula is the cause or the effect of older peoples’ more credulous outlook on other people.

Correction (December 4): The original version of the article incorrectly stated that the young adults in the study showed higher activity in a brain region called the anterior singula. In fact, the activity was observed in the anterior insula. The mistake has been corrected, and The Scientist regrets the error.