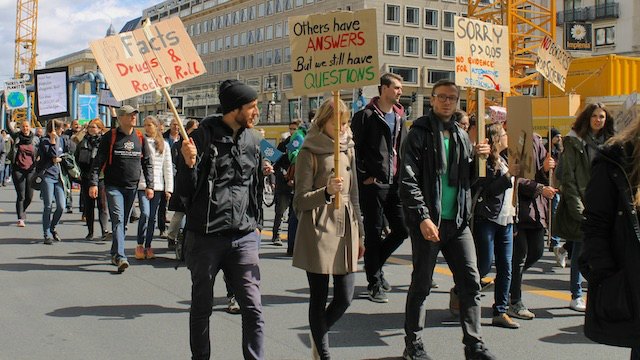 March for Science, Berlin, Germany, April 22, 2017DIANA KWONOpinions are divided about whether April’s marches for science and climate will effect political change, according to a Pew Research Center survey conducted earlier this month.

“The data speak to the difficulties of making the case...

Thousands participated in the March for Science March 22 in Washington DC, with more than 600 companion marches across the globe, as The Scientist reported. The Peoples Climate March drew tens of thousands to DC on March 29, the 100th day of President Trump’s term, to draw attention to climate change and protest Trump’s climate policies, The New York Times reported.

According to the survey of 1,012 participants representative of the overall US population, the majority of Democrats surveyed believe that the marches will achieve demonstrators’ goals of encouraging activism among scientists, support for government funding of science, efforts to fight climate change, and the practice of policymakers seeking expert scientific advice. Most Republicans feel that the march will not achieve those goals, the survey found.

“These survey findings show the American public is closely split in their views about the protesters’ goals—a sizeable share of the public is aligned with the protesters’ arguments but a roughly similar share are either opposed to the goals of the protesters or have yet to be convinced,” Funk continued in the release. Support, or lack thereof, for marchers’ goals also fell along political lines.