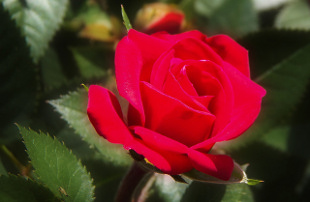 In the quest for tools that would offer finer control of plant physiology, researchers from Linköping University in Sweden have created flexible circuits inside the stems and leaves of rosebush cuttings. The work, published last week (November 20) in Science Advances, may also lead to opportunities to harvest energy from the plants’ natural biochemical processes, according to the report.

The team, led by physicist Magnus Berggren, formed the circuits using a conductive and water-soluble polymer—poly(3,4-ethylenedioxythiophene), or PEDOT. The researchers dissolved it in water and then placed a cut rose into the container. The rose took up the PEDOT in its xylem along with water, where the PEDOT then aggregated on its own into wires up to five centimeters long. The material was visible when the researchers peeled back the top layer of plant matter from the stem.

“There was a moment during the screening when Eleni...

By attaching electronic probes to both ends of the wires, the researchers confirmed that the PEDOT structures could conduct electricity along their lengths, and used the wires to create a transistor. Berggren’s team also used vacuum pressure to get leaves to take up a different PEDOT solution, creating a conductive network inside the plant tissue. The researchers could adjust the visible color of the resulting leaves by applying different voltages.

“It seems cool, but I am not sure exactly what the implication is,” Zhenan Bao, who works with organic electronics at Stanford University in California, told Nature.

The study is a proof-of-concept that primarily utilized plant cuttings; its applications to living plants remain to be seen, though the authors are hopeful. “Previously, we had no good tools for measuring the concentration of various molecules in living plants,” study coauthor Ove Nilsson of Sweden’s Umeå Plant Science Centre said in a statement. “Now we’ll be able to influence the concentration of the various substances in the plant that regulate growth and development. Here, I see great possibilities for learning more.”