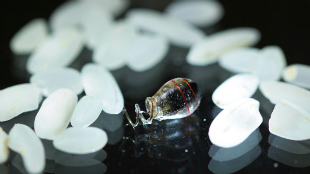 STANFORD UNIVERSITY, AUSTIN YEEItty-bitty medical devices can be implanted in the human body to do any number of tasks, such as stimulate nerves or regulate heartbeats. The challenge to getting them way deep down into tissue has been getting power to them, but engineers reported this week (May 19) in PNAS that they’ve come up with a solution, so-called “mid-field wireless transfer.”

“With this method, we can safely transmit power to tiny implants in organs like the heart or brain, well beyond the range of current near-field systems,” John Ho, a graduate student at Stanford University and the lead author of the study, said in a press release.

The new technology transmits energy wirelessly through the body, rather than relying on batteries. It works by using near-field electromagnetic waves—those that don’t typically travel very far through tissue—but adapted them to propagate within the body instead of petering out....

To demonstrate how it works, the team designed a pacemaker, about the size of a grain of rice, that can be charged by holding a card-size power source near the recipient, but outside the body. To date it’s been tested in a rabbit, but Ada Poon, the lead investigator on the project said in the press release that she is now working on preparing it for testing in humans.

“I think that amongst the solutions that are proposed to power an implant, this is going to be the most reliable,” Patrick Mercier, an engineer at the University of California, San Diego, told New Scientist.