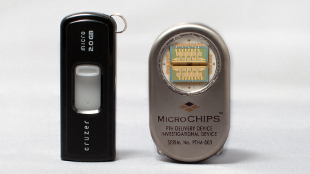 The drug delivery device (on right) next to an everyday computer memory stick.COURTESY OF MICROCHIPS, INC., MASSACHUSETTS

Programmable, wireless microchips used to deliver drugs have reached a critical milestone—successfully administering daily doses of the osteoporosis drug teriparatide, normally given by injection, to seven women aged 65 to 70.

Developed by MIT professors Robert Langer and Michael Cima and scientists at Massachusetts-based biotech MicroCHIPS Inc., this is the first time such chips have proven their worth, Langer said in a press release. Given their wide applicability, the chips may just change how doctors monitor their patients’ medical care.

“You could literally have a pharmacy on a chip,” Langer said in a press release. “You can do remote control delivery, you can do pulsatile drug delivery, and you can deliver multiple drugs.”

The results were reported last week in Science Translational Medicine.