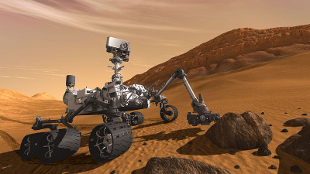 Wikimedia, NASANASA’s rover Curiosity has so far failed to find evidence for the presence of methane in concentrations high enough to suggest that methane-exhaling microbes are living in the soils of Mars. The space agency announced at a press conference last week (November 2) that they could say with 95 percent confidence that methane in the Martian atmosphere does not exceed 5 parts per billion (ppb), far less than the 10 ppb that would signal that the Red Planet supports microbial life.

“Bottom line is that we have no detection of methane so far,” Chris Webster, a Mars scientist at the Jet Propulsion Laboratory in Pasadena, California, told Nature.

The findings don’t completely rule out the possibility of life on Mars, however. The team was only able to perform four tests with the Tunable Laser Spectro­meter (TLS), Curiosity’s atmospheric analyzer, which beams a laser into a chamber filled...

The announcement certainly hasn’t put the European Space Agency off from its plan to send its Trace Gas Orbiter to Mars in 2016. “I’m not worried right now,” Olivier Witasse, the mission’s project scientist at the European Space Research and Technology Centre in Noordwijk, the Netherlands, told Nature. “I think it’s not the end of the story.”