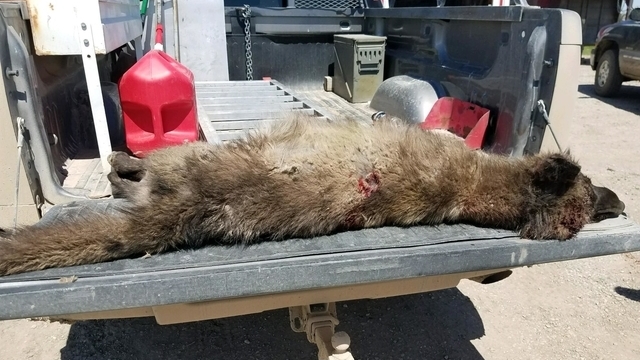 A large animal shot in Montana was originally reported as a wolf.MONTANA FISH, WILDLIFE AND PARKS

On May 16, a rancher in Denton, Montana, shot and killed an animal that approached his livestock. The rancher initially reported the animal as a wolf, but specialists from the Montana Department of Fish, Wildlife and Parks disagreed. In photographs, the animal’s canine teeth and front paws appeared smaller than a wolf’s should be.

“Based on the photos, we have some doubts as to whether it was a pure-bred wolf, or a hybrid or a wild dog of sorts,” Warden Sgt. Kyle Anderson of the Montana Fish, Wildlife and Parks (FWP) tells KXLO, a Montana radio station, as reported by The Idaho Statesman.

“The animal was a young, non-lactating female and a canid, a member of the dog family, which includes dogs, foxes, coyotes and wolves,” reads a statement from...

Scientists from the US Fish and Wildlife Service Laboratory in Ashland, Oregon, will extract DNA from the tissue to compare genetic markers from it to those of known species. The process “may take weeks or months, depending on the laboratory’s backlog of cases,” the statement says.

“All of which means it may be awhile before the anyone really knows what the animal near Denton really was,” it concludes. 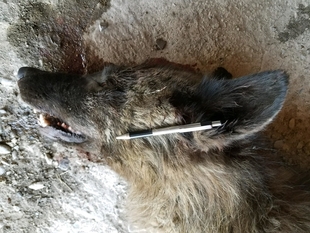 The animal’s canine teeth are smaller than those typically found in a wolf.MONTANA FISH, WILDLIFE AND PARKSWolves began arriving in northwest Montana in the 1980s and were reintroduced to Yellowstone National Park in the mid-1990s. The statewide population has increased via natural dispersal since then, but wolf packs are typically found in the western half of Montana, according to the FWP. Denton is in the center of the state.

In 2007, a rancher killed a wolf-dog hybrid in Garfield county, about 150 miles east of Denton. Tissue samples from that animal were sent to the University of California, Los Angeles, for genetic analysis, where “experts were able to confirm from the 2007 sample that the attacking animal was a wolf–dog hybrid, but we still don’t know where it came from or who the owner might have been,” says Carolyn Sime, FWP wolf program coordinator, in a statement.