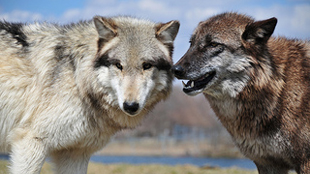 FLICKR, SERGE MELKIResearchers recently proposed that domestic dogs originated approximately 18,000 to 32,000 years ago from European wolves. A new study shows that these wolves may have already had some social skills that helped them interact with humans. The research was published in Frontiers in Psychology this week (December 3).

“There have been several hypotheses regarding domestication, including that there are some social skills dogs have that wolves don’t, or that dogs can accept humans as social partners and wolves can’t,” coauthor Friederike Range of the Messerli Research Institute at the University of Veterinary Medicine Vienna in Austria told NBC News. “The story is not that simple—this we can say for sure.”

Range and her coauthor Zsófia Virányi worked with wolves and dogs raised by humans at the Wolf Science Center near Vienna. In one set of trials, each wolf or dog was shown a treat,...

Dogs and wolves were both more likely to find the treat with a demonstration from a human or a dog than without a demonstration, suggesting that both species responded to visual cues. The researchers also showed that wolves were less likely to search for a treat that had not been hidden during control trials than dogs, which could indicate that wolves are more sensitive to cues from social partners or that dogs concentrate more on human actions, regardless of their importance.

“Of course, just testing wolves and dogs is not enough to permit wide-ranging conclusions about the origins of the sensitivity to people that we see in dogs,” Clive Wynne of the University of Arizona, who was not involved in the research, told International Business Times. “Quite likely, other species would also show similar sensitivity if given the same opportunities in early life.”