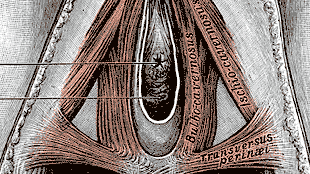 WIKIMEDIAResearchers at Wake Forest University in North Carolina have designed, built, and implanted vaginas for four women who were born with Mayer-Rokitansky-Küster-Hauser syndrome, in which the organ did not properly develop during embryogenesis. The procedure was successful, according to a report published last week (April 11) in The Lancet, with all patients reporting normal levels of “desire, arousal, lubrication, orgasm, satisfaction, and painless intercourse.”

“Really for the first time we’ve created a whole organ that was never there to start with; it was a challenge,” lead researcher Anthony Atala, director of the Institute for Regenerative Medicine at Wake Forest, told BBC News. But, he added to Reuters, “by the six-month time point, you couldn’t tell the difference between engineered organ and the normal organ.”

The researchers scanned the pelvic region of each patient—all of whom were teenagers at the time—to design customized scaffolds, which were then...

In addition to the normal sexual functioning that all four women reported, the researchers say that pregnancy is theoretically possible for the two patients whose vaginal connection to the uterus was not disrupted by the developmental disease. “Truly I feel very fortunate because I have a normal life, completely normal,” one of the patients said in a video provided by the hospital in Mexico, according to The Washington Post.

The success adds to a growing list of organs that have been grown by researchers in the lab, and implanted into patients. Researchers at the University of Basel in Switzerland are using cell-seeded scaffolds to reconstruct the noses of patients who have suffered from skin cancer, and the 30-year-old Colombian patient who received a tissue-engineered airway more than five years ago is still doing well.

However, Martin Birchall of University College London cautioned that there is still a long ways to go. “The steps between first-in-human experiences such as those reported here and their use in routine clinical care remain many, including larger trials with long-term follow-up, the development of clinical grade processing, scale-out, and commercialization,” he told the BBC.