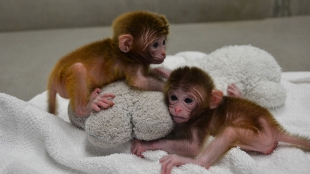 Researchers at the Oregon National Primate Research Center have generated the world’s first ever chimeric primates—three young monkeys derived from six distinct genomes, according to a paper published today (January 5) in Cell.

The infants—a set of twins and a singleton—were generated from 4-day-old embryos of six different rhesus monkeys stuck together early in development, then implanted into five adult females. Tests on the fetuses showed that all of the infants’ organs and tissues contained a mixture of cells carrying the different genomes, and all three monkeys that made it term appear to be healthy with no birth defects.

Although the embryos grow together into one larger embryo, "the cells never fuse," Shoukhrat Mitalipov, an associate scientist at the Oregon National Primate Research Center who led the research, told...

Chimeric mice were first bred in the 1960s, with chimeric rats, rabbits, sheep, and cattle appearing over the last half a century. "I don't think it's ever been done before in a primate species," Mitalipov told OregonLive.

Roku and Hex from OHSU News on Vimeo.