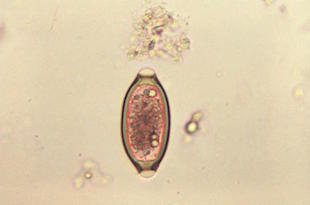 “It’s a beautifully done paper,” immunologist Joel Weinstock of Tufts University in Boston, who wasn’t involved in the study, told Science. “It had not been previously shown that one of the mechanisms of IBD is through changes in the intestinal flora.”

Some studies suggest that parasitic worms may have beneficial effects on everything from intestinal diseases to autism. In fact, inflammatory bowel disease (IBD) is known to be less prevalent in parts of the world with high rates of worm infection....

To identify the mechanism behind this unusual link, NYU’s Ken Cadwell and colleagues studied mice that lacked the gene Nod2, which confers susceptibility to Crohn’s disease. The mice developed abnormal gut morphology, including increased numbers of Bacteroides vulgatus bacteria.

But infecting the mice with the intestinal worm Trichuris muris restored the animals’ guts to a healthy state, the researchers found. It did this by blocking B. vulgatus with the immune signaling molecules interleukin 4 (IL4) and IL13, and by promoting the growth of beneficial Clostridiales bacteria. Infection with another worm, Heligmosomoides polygyrus, had an even stronger beneficial effect, the researchers reported.

“What we found was that if you take a worm that’s otherwise not supposed to be that great for you, and give it to these mice, you [can] prevent or reverse inflammation,” Cadwell said in a press release.

In addition, the researchers analyzed stool samples from an indigenous Malaysian population with high levels of helminth infection, both before and after a deworming treatment, finding that Clostridiales levels were reduced whereas B. vulgatus levels were increased.

The researchers were able to achieve the same beneficial effect as the worms by giving mice Clostridiales alone. “Maybe we don’t need to give people parasitic worms, which can be harmful and cause disease, and instead, target harmful bacteria by replacing them with healthy bacteria and restoring a healthy microbiome,” Cadwell said in the press release.