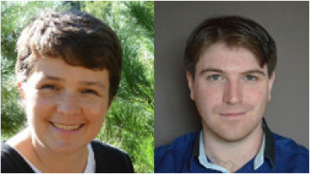 Emily Willingham and David Robert Grimes are the winners of the 2014 John Maddox Prize for Standing up for Science.SENSE ABOUT SCIENCE

Emily Willingham and David Robert Grimes have won the 2014 John Maddox Prize for Standing up for Science. Willingham and Grimes have written about controversial topics for publications such as Forbes and The Scientist, and The Guardian, respectively. They were selected for their “courage in promoting science and evidence on a matter of public interest, despite facing difficulty and hostility in doing so,” the U.K.-based charity Sense About Science wrote in its announcement of the prize, issued this week (October 27).

Willingham, a U.S.-based biologist and freelance journalist, has written evidence-driven analyses on subjects including school shootings, home birth, and autism.

Grimes is a physicist and a postdoctoral researcher at the University of Oxford, where he studies oxygen distribution in tumors. He has written about...

“Misconceptions surrounding issues of science and evidence are incredibly detrimental to finding pragmatic solutions to the problems we face as a society; challenging these misunderstandings and confronting misinformation may often feel like a Sisyphean task, but it is vital,” Grimes said in a statement. “I am deeply humbled and honoured [that] my contributions to public discussion on evidence-based policy have been recognised.”

The prize is named for the late Sir John Maddox, the editor of Nature for 22 years and “a passionate and tireless champion and defender of science, engaging with difficult debates and inspiring others to do the same.” This is the third annual John Maddox Prize awarded by Sense About Science in partnership with Nature and the Kohn Foundation.