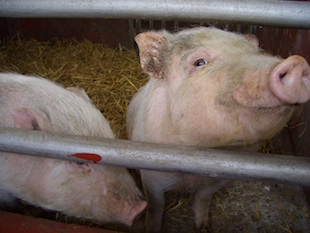 FLICKR, TITANIUM22Scientists have made an important stride toward pig-to-human xenotransplants: a heart from a genetically modified pig implanted in a baboon has survived for more than 2.5 years, thanks to a cocktail of anti-rejection drugs, researchers at the US National Institutes of Health reported yesterday (April 5) in Nature Communications. The researchers previously reported a survival record of 500 days for such a transplant.

“Xenotransplants—organ transplants between different species—could potentially save thousands of lives each year that are lost due to a shortage of human organs for transplantation,” study coauthor Muhammad Mohiuddin, a transplant surgeon at the National Heart, Lung, and Blood Institute, told the Agence France-Presse.

Previous efforts failed because the recipient’s immune system rejected the organs. To overcome this, Mohiuddin and colleagues used organs from knockout pigs that lacked the galactosyltransferase gene. This gene produces the human proteins CD46 and thrombomodulin, which prevent immune rejection...

The researchers transplanted the pig hearts into the abdomens of five baboons, and then treated the animals with a cocktail of anti-rejection drugs and antibodies, The Washington Post reported. The addtional, donor hearts survived for a median of 298 days inside the baboons, and one survived a record 945 days, the researchers reported. One animal had to be euthanized because of an infection.

“These hearts could have gone even longer, but we wanted to test to see if the animals had developed some kind of tolerance to the organs,” Mohiuddin told The Verge. When the researchers stopped administering the drug cocktail, the animals started to reject the organs, so they were removed, Mohiuddin explained.

The next step will be replacing the baboons’ own hearts with the pig organs, the researchers say. More research is needed before the procedure can be safely attempted in humans. Beyond rejection, there are concerns that humans could become infected with endogenous pig viruses. But Arthur Caplan, a bioethicist at New York University, told The Verge, “We have new gene editing techniques that will lets us focus on their immune system, so it should be possible to do it.”