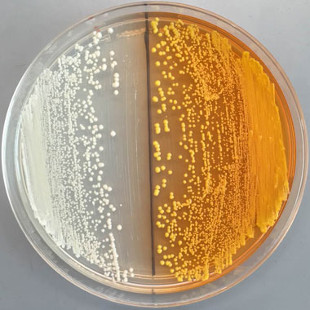 Right: yeast cells producing the yellow beet pigment betaxanthin, which researchers used to identify key enzymes in the production of BIAs—metabolites in the poppy plant that could lead to morphine, antibiotics, and other pharmaceuticals. WILLIAM DELOACHEBuilding on previous work toward yeast–based opioid production, a team led by investigators at the University of California, Berkeley, has engineered a strain of yeast (Saccharomyces cerevisiae) that can convert glucose into a benzylisoquinoline alkaloid (BIA) intermediate from which morphine can be derived. The results, published in Nature Chemical Biology this week (May 18), prompted a trio of scientists who were not involved in the work to urge the research community to “regulate ‘home-brew’ opiates” in a Nature commentary.

“The advance marks the first time that scientists have artificially reproduced the entire chemical pathway that takes place in poppy plants to produce morphine in the wild,” The Guardian reported. Researchers...

“What you really want to do from a fermentation perspective is to be able to feed the yeast glucose, which is a cheap sugar source, and have the yeast do all the chemical steps required downstream to make your target therapeutic drug,” study coauthor John Dueber of Berkeley said in a statement. “With our study, all the steps have been described, and it’s now a matter of linking them together and scaling up the process. It’s not a trivial challenge, but it’s doable.”

Dueber agreed regulation is necessary—and urgent. “The field is moving surprisingly fast, and we need to be out in front so that we can mitigate the potential for abuse,” he said in the statement.

“This work has very interesting and important implications, but there are regulatory gaps,” MIT’s Kenneth Oye, a coauthor on the Nature commentary, told Nature News. “The question is, can regulators be nimble and figure this out before people finish the work?”