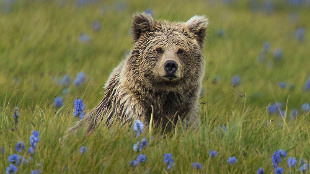 FLICKR, U.S. EMBASSY PAKISTANLast year, researchers proposed that the yeti was a previously unknown species of bear. But their analysis failed to account for genetic variation among bears that could instead identify the mythical creature as the Himalayan brown bear, according to a study published this week (March 16) in ZooKeys.

The controversial 2014 study compared the DNA sequence of a small mitochondrial gene fragment from two supposed yeti samples—one obtained 40 years ago in northern India, plus a more modern sample from a Bhutanese forest—to that of other animals, and reported a 100 percent match to a 40,000-year-old Norwegian polar bear sample. The authors used the match to argue that the yeti may be a hybrid bear species resulting from an ancient mix of polar bear (Ursus maritimus) and brown bear (Ursus arctos). Later, a separate team suggested that the supposed yeti sample...

This latest study, led by researchers from the Smithsonian National Museum of Natural History and the University of Kansas, included a fuller analysis of the “yeti” sequences and their respective matches among existing and extinct bear species. The scientists found that the original study’s small gene fragment was essentially identical in brown and polar bears, suggesting that the DNA evidence would not have been sufficient to distinguish between the two species. Since polar bears do not live in the Himalayas, but brown bears do, the authors suggest that the “yeti” is merely a Himalayan brown bear, a potential subspecies known to walk on its hind legs.

“There is essentially no reason to believe that [the hairs] belong to a species other than the brown bear,” study coauthor Eliécer Gutiérrez of the National Museum of Natural History told Live Science.