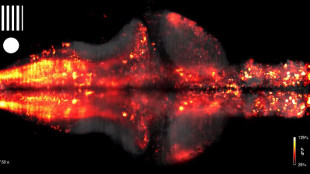 YOUTUBE, N. VLADIMIROV ET AL., NATURE METHODS (VIA WIRED)Because zebrafish larvae are transparent, their brains small enough to be viewed under a microscope, they make ideal models for observing central nervous system activity in vivo. In a paper published in Nature Methods this week (July 27), a team from the Howard Hughes Medical Institute’s Janelia Farm Research Campus in Ashburn, Virginia, described using light-sheet microscopy to record the activity of nearly every neuron in the larval zebrafish brain as the animal responded to sensory inputs.

“There must be fundamental principles about how large populations of neurons represent information and guide behavior,” study coauthor Jeremy Freeman told Wired. “In this system where we record from the whole brain, we might start to understand what those rules are.”

While it’s not yet clear whether insights gleaned from studies on fish will translate to other vertebrates, neuroscientists are working...

“The first step was descriptive, so we could see which neuron is fired,” Bettina Schmid, who runs the fish core facility at the German Center for Neurodegenerative Diseases in Munich, told The Scientist in February. “But now we’re at the level that we can say what happens to the behavior if the neuron is fired.”