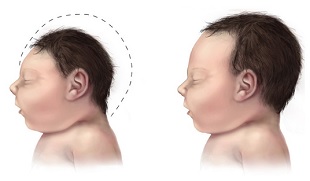 A baby with microcephaly (left) compared to a baby with a typical-sized head (right)WIKIMEDIA, CDCMore than one-quarter of women taking part in a study of Zika infection during pregnancy had fetuses with potentially serious abnormalities, according to a report published last week (March 4) in the New England Journal of Medicine. The analysis compared fetuses in infected mothers to fetuses in non-infected mothers, thereby providing the control-like group that many previous studies have lacked.

The analysis is “what people have been waiting for,” Amesh Adalja of the University of Pittsburgh Medical Center, who was not involved in the work, told LiveScience, adding that the comparison of the two groups allowed stronger links to be drawn between Zika infection and microcephaly. “This is the closest we’ve gotten to [proving] causation. . . . For all intents and purposes, this justifies the concern raised early on.”

“We saw a very high percentage of abnormal fetal ultrasounds, and we saw a significant number of central nervous system findings, which is surprising to us,” study coauthor Karin Nielsen-Saines of the University of California, Los Angeles, told STAT News. “This alerts people that pregnancy in women affected with Zika are high-risk pregnancies.”

Catherine Spong of the National Institute of Child Health and Human Development, who was not involved with the study, told STAT that the results are important and concerning, but also noted that the sample sizes were small. “Stillbirth has many, many different causes, including maternal age [and] genetic factors,” she said.

The researchers suggested using the term “congenital Zika virus syndrome” to reflect the host of birth abnormalities now being linked to infection, Nielson-Saines told LiveScience. “Zika definitely causes the problems,” she said. “We think microcephaly is only the tip of the iceberg.”