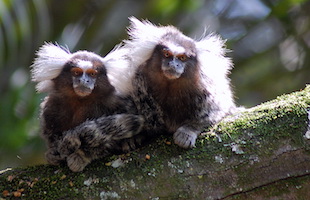 WIKIMEDIA, DARIO SANCHESA small sampling of capuchins and marmosets from various sites around the state of Ceará, Brazil, have tested positive for Zika virus (ZIKV), researchers reported in a preprint posted to BioRxiv April 20. Further analysis of the virus from two animals revealed that it is identical to a strain circulating among humans in South America.

“This is the first report on ZIKV detection among Neotropical primates, which stands as a caveat for the possibility that they could act as reservoirs,” the authors, led by Silvana Favoretto of the Pasteur Institute in São Paulo, wrote in their report.

The team took blood samples or oral swabs from 15 free-ranging marmosets and nine capuchins, eight of which were pets. Four marmosets and three capuchins tested positive for the virus.

The regions of the state from which infected animals hailed overlapped with regions where there have been either suspected or...

“The Zika virus outbreak in Brazil has been thought to have been mainly transmitted between humans by mosquitoes,” Vincent Racaniello of Columbia University in New York wrote on his Virology Blog. “However, the results of this new study suggests that nonhuman primates could also be involved.”