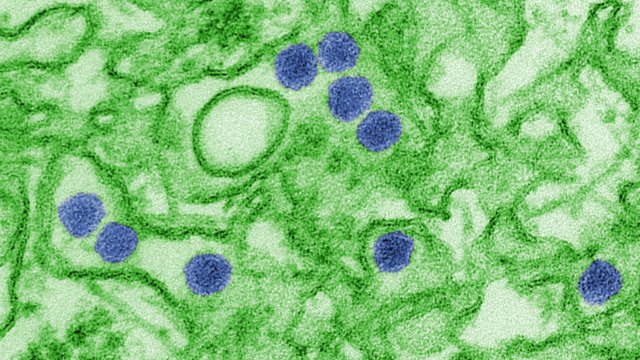 WIKIPEDIA, CDC/CYNTHIA GOLDSMITHThe brains and genital tracts of adult monkeys experimentally infected with Zika harbor the virus, according to a study published yesterday (October 3) in Nature Medicine. Even after the virus is no longer detectable in the animals’ blood, it persists in semen, saliva, lymph nodes, and the genital tract, the authors, led by researchers at Harvard Medical School, reported.

“It’s interesting to realize that during an infection the virus could be getting into the brains of adults who are otherwise healthy,” David O’Connor, a pathologist at the University of Wisconsin who did not participate in the study, told The Verge. “It’s going to take a significant amount of additional work to unravel what that really means.”

In August, researchers reported that Zika virus infected neural progenitors in the adult mouse brain. In this latest study on monkeys, cerebellar granule cells appeared to have the highest...

The monkeys mounted innate and adaptive immune responses to combat Zika virus and eliminate it from the blood, the research team found. Yet the virus still stuck around in other body fluids. Case reports in humans have shown that Zika can linger in semen for months.

These experiments, along with a previous study in macaques, “clearly show that despite ZIKV [Zika virus]-specific immunity, viral shedding continues unabated in anatomic tissues and fluids,” the authors wrote in their report. “Our data suggest that anatomic sites such as the male genital tract (MGT) and oral mucosa might harbor persistent reservoirs of ZIKV that, under certain conditions, could facilitate viral transmission over extended periods to uninfected hosts.”

“This is quite reassuring that basically the strains have not diverged enough,” Nikos Vasilakis, a virologist at the University of Texas Medical Branch who was not part of the study, told The Verge. However, the strains studied were one that’s circulating in the Americas and a similar one from Thailand. It remains to be seen whether more distantly related strains—such as those isolated in Africa and the Americas—evoke similar immunity to one another, he added.