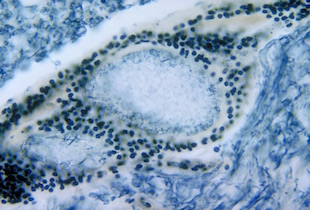 A cross section of the spinal cord showing demyelination and inflammationCDC, DR. KARP, EMORY UNIVERSITYZika virus has now been linked to yet another neurological problem, in addition to microcephaly and Guillain-Barré syndrome (GBS). Two patients who tested positive for the virus have been diagnosed with the autoimmune disorder acute disseminated encephalomyelitis (ADEM), according to a small study presented this week at a meeting of the American Academy of Neurology in Vancouver, British Columbia.

“Though our study is small, it may provide evidence that in this case the virus has different effects on the brain than those identified in current studies,” study coauthor Maria Lucia Brito Ferreira of the Restoration Hospital in Recife, Brazil, said in a statement. However, “much more research will need to be done to explore whether there is a causal link between Zika and these brain problems,” Ferreira added.

According to Newsweek, the...

Either immediately or within two weeks of becoming infected with Zika, the patients started developing symptoms including numbness and weakness in their extremities and headaches.

Two of the patients were diagnosed with ADEM, which is caused by the immune system attacking the myelin sheaths around nerves of the brain and spinal cord—a hallmark of multiple sclerosis (MS), Newsweek reported. But unlike MS, which flares up repeatedly, ADEM usually only occurs once, and patients generally recover within several months. In severe cases, ADEM can result in a coma, vision loss, or paralysis.

Four patients in the study were diagnosed with GBS, a disorder that affects the peripheral nerves and can cause (usually temporary) paralysis—an association seen in previous studies. A growing body of research also links the virus to the birth defect microcephaly.

“Of course, the remaining question is ‘why’—why does Zika virus appear to have this strong association with GBS and potentially other immune [or] inflammatory diseases of the nervous system?” James Sejvar of the US Centers for Disease Control and Prevention who was not involved in the study told The Washington Post. “Hopefully, ongoing investigations of Zika virus and immune-mediated neurologic disease will shed additional light on this important question.”