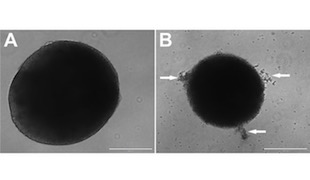 Thirty-five-day-old human brain organoids infected with Zika virus (B) were 40 percent smaller than those grown under control conditions (A). Arrows indicate detached cells.REPRINTED WITH PERMISSION FROM GARCEZ ET AL., SCIENCE (2016)A growing number of studies have linked Zika virus infections to microcephaly, but the mechanism by which the virus exerts its potentially lethal effects remains unknown. Neuroscientist Patricia Garcez and colleagues at the Federal University of Rio de Janeiro, Brazil, infected neural stem cells from human induced pluripotent stem cells (iPSCs) with Zika, finding that the virus targets and kills neurospheres and brain organoids, the researchers reported in a study published yesterday (April 10) in Science.

“Our results demonstrate that [Zika virus] induces cell death in human iPS-derived neural stem cells, disrupts the formation of neurospheres and reduces the growth of organoids, indicating that [Zika] infection in models that mimics the first trimester of...

Zika virus has been associated with the recent dramatic increase in the number of microcephaly cases in Brazil. While the link has not been proven, previous studies have shown that the virus can infect and kill neural stem cells.

For the present study, Garcez and colleagues coaxed iPSCs to develop into neural stem cells. They infected the neural progenitors with Zika virus and grew them as clusters of cells (neurospheres), and as miniature brain organoids.

Meanwhile, some scientists are still debating the mechanism by which Zika may cause microcephaly. A paper published earlier this month (March 4) in The Lancet called for further studies to determine whether the birth defect is due to direct infection of brain cells or due to the placenta mounting a response to the virus.