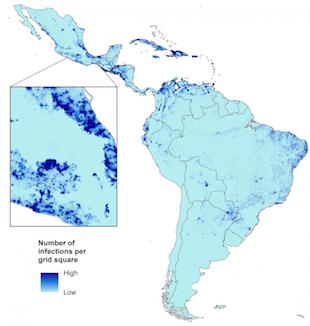 Map: projected number of Zika infections in childbearing womenUNIVERSITY OF SOUTHAMPTONBy the time the first wave of the current Zika outbreak is over, up to 1.65 million pregnant women in Central and South America could become infected with the virus, researchers from the WorldPop Project and Flowminder Foundation and their colleagues have estimated. In total, more than 90 million people could become infected throughout these regions and the Caribbean, with Brazil having more than three times the number of every other region, according to the team’s study, published today (July 25) in Nature Microbiology.

“These projections are an important early contribution to global efforts to understand the scale of the Zika epidemic, and provide information about its possible magnitude to help allow for better planning for surveillance and outbreak response, both internationally and locally,” study coauthor Andrew Tatem, director of WorldPop and the Flowminder Foundation, said in a...

Another study suggests that merely delaying pregnancy may not be sufficient to reduce the risk of birth defects due to Zika virus infection, which has been linked to microcephaly and fetal death. Researchers from the Yale School of Public Health and colleagues modeled the disease’s transmission in reducing the incidence and prevalence of Zika infection in Columbia, finding that, in order to be effective, pregnancy delays should be implemented early on in an outbreak, should persist more than six months, and should also be complemented by mosquito-control efforts, according to the study, published today in the Annals of Internal Medicine. The authors noted that pregnancy delay guidelines vary from country to country.

Meanwhile, another study in Annals confirms that people traveling to and from Brazil for the 2016 Olympics do not pose a significant risk of spreading the virus abroad.

The US Centers for Disease Control and Prevention (CDC) today (July 25) issued new guidelines to help healthcare providers care for pregnant women who may have been exposed to Zika, expanding the time frame for testing to up to 14 days after the possible exposure. The CDC also updated its recommendations for preventing sexual transmission of the virus to include the use of protection when having sex with any person (male or female) who has traveled to or lived in areas where Zika is actively spreading, following a reported case of female-to-male transmission.