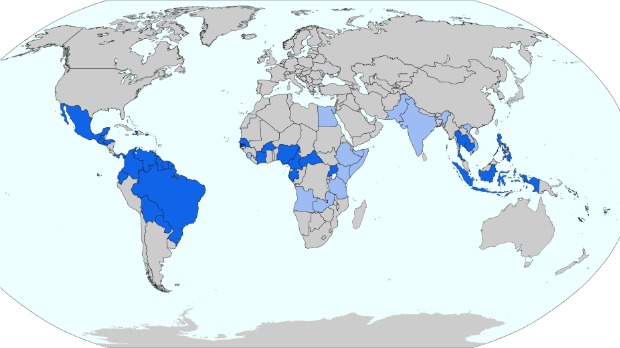 Peter Piot, director of the London School of Hygiene and Tropical Medicine, told The Guardian he anticipates the WHO will declare Zika a public health emergency. “WHO clearly dropped the ball when it came to responding to the Ebola virus. It took about five months to declare the Ebola virus in West Africa as a public health emergency of international concern. . . . Several reports have been published [on the response to Ebola] and the WHO can, and must, do better.”

In Colombia, the second-most Zika-affected country with around 20,000 confirmed cases, more than 2,000 pregnant women are confirmed to have been infected with the virus. None of the fetuses have been...

In Brazil, public health officials have suspected that a sudden surge in microcephaly diagnoses this past year may be related to the introduction of Zika to the country. João Ricardo de Almeida, a neurologist who’s examining microcephaly cases in Brazil, told NPR’s Goats and Soda that the babies have unusual characteristics, such as stiff muscles in the upper body and neck and a brain appearing “like a smooth rock.”

“Regarding Zika there seems to be some particular abnormalities that we do not see in [microcephaly cases caused by] toxoplasmosis or cytomegalovirus or rubella,” he told Goats and Soda.

Zika has not been proven to cause neurological defects, and researchers are collecting data to be able to say one way or the other if there is a causal relationship. Others say the spike in Brazilian cases could be due to previous underreporting and a push now to screen for the condition.

Nature News last week (January 28) reported that a study from the Latin American Collaborative Study of Congenital Malformations calculated “that the maximum number of cases that would have been expected in the northern state of Pernambuco [Brazil] in 2015 is around 45. Yet Pernambuco reported 26 times that number last year. Even if Zika is causing microcephaly, these huge numbers are simply too high to be credible, says the report.”

Clinicians are also concerned about a possible tie to Guillain-Barre syndrome, which can results in paralysis. According to CBC News, Colombia has reported 41 cases of Guillain-Barre as of last week (January 29), thought to be linked with Zika.

Better diagnostics—those that could sort out whether a past infection was due to Zika or another related virus, such as Dengue—would go a long way in answering epidemiological questions. Several groups are developing easy-to-use, specific serologic tests (see “New Tests for Zika in the Works,” The Scientist, January 25, 2016). The Washington Post reported last week (January 29) that a new assay could be available in Brazil within weeks.

A Zika vaccine, if effective, could take years to receive approval. But one may be ready for testing by year’s end. “This vaccine is easy to produce,” Gary Kobinger, the head of special pathogens at Canada’s National Microbiology Laboratory in Winnipeg, told Reuters. Kobinger is working on the experimental immunization with Inovio Pharmaceuticals and GeneOne Life Science. “It could be cranked to very high levels in a really short time,” he told Reuters.