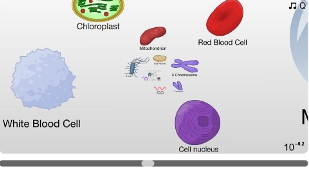 A screen shot of The Scale of the Universe 2HTWINS.NET/SCALE2/

An interesting interactive graphic has been making the social media rounds this week.  With a scroll bar at the bottom of the page, a viewer can zoom down to the scale of a string (from string theory, that is), all the way out to the size of the observable universe, with loads of stuff at their respective scales in between.

One interesting thing to take from this graphic is just how much is now known about everything that’s out in space.  This is not the silly constellation map you did for an astronomy segment in junior high school. This interactive map depicts things like the Fornax cluster, and by clicking on the image itself, you can learn that the Virgo Cluster, where Earth resides, is just “a small filament extending off of the Fornax Cluster.”

The graphic was developed by Cary and Michael Huang, who according to ABC News are two teenage twins living in Moraga, California. What started as a 7th-grade science project grew over the span of a year and a half as Cary collected more information from Wikipedia and astronomy books and Michael perfected the programming.

You can see the full graphic here. Just give it a few minutes to load, it’s worth it.