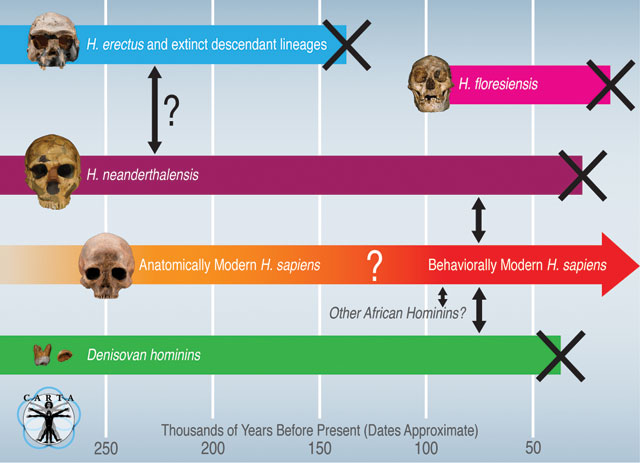 LAST KNOWN SURVIVORS: Most clades of mammals consist of multiple, potentially cross-fertile species, each occupying its own ecological niche. We humans are an unusual exception, having replaced every related species wherever we went, with minimal interbreeding (black arrows).FIGURE BY JESSIE ROBIE AND PASCAL GAGNEUX

When did “behaviorally modern humans” (BMHs)—i.e., us, the single species that has taken over the planet using our unusual cognitive abilities—first arise? We do not know for sure, but anthropogeny, which takes a systematic approach to explaining human origins, offers some clues. Advances in anthropogeny require a broad array of information gathered from numerous disciplines. But most human-origin events are shrouded in mystery and difficult to reconstruct, making this a discipline where setting up thought experiments could be useful.

Let’s first ask if the cognitive abilities of BMHs are strictly genetically wired, or derived from gene-environment interactions. Imagine that we place 1,000 healthy, unrelated...

There used to be two competing theories about this origin. The “multiregional hypothesis” posited that different “races” of humans evolved in parallel from more ancient Homo erectus ancestors who had spread out from Africa starting ~2 million years ago. The alternate view, better supported by available facts, was the “Out of Africa” theory, which posited that all humans alive today came from a single origin in Africa, involving perhaps fewer than 10,000 individuals. Today, a hybrid theory posits an initial Out of Africa event, but includes a small degree of interbreeding between BMHs and other extant cousins, such as Neanderthals, Denisovans, and unknown African lineages. While researchers continue to work out the details of this limited interbreeding, other unanswered questions remain.

Evidence for “anatomically modern humans” (AMHs, individuals whose fossil skeletons look much like ours), goes back ~200,000 years in Africa. But AMHs were not necessarily BMHs. Indeed, the archaeological finds surrounding older AMHs in Africa show no evidence of some types of activities (such as personal ornamentation with beads, or burials accompanied by funerary items) that one might associate with current human “mentalizing abilities” (so-called “theory of mind,” or the ability to fully attribute mental states to others, similar to one’s own). Thus, it remains unknown whether the African AMHs of 100–200 thousand years ago had the same cognitive potential as humans today. Or do our fully modern cognitive capacities go back even deeper in time, to our common ancestor with Denisovans and Neanderthals ~500,000 years ago (Homo heidelbergensis)? Or even earlier, to ~1–2 million years ago (Homo erectus)?

For the moment, we are limited in what the data can tell us, so it is worth trying more thought experiments. If we took 1,000 newborn BMH babies from 60–70,000 years ago in Africa, brought them to the United States today, and gave them every type of support and opportunity, would they end up being representative of the current human population? Very likely, yes. In some sense, this experiment has already been done. People have migrated to the U.S. from all over the world, and if their children are given every opportunity, they generally exhibit much the same behaviors and abilities (just visit students on the UC San Diego campus). Now consider what would happen if we did the same experiment with 1,000 newborn AMH babies from Africa ~100–200,000 years ago. How would they fare? The answer is far less clear.

At a May 2013 symposium organized by the UC San Diego/Salk Institute Center for Academic Research and Training in Anthropogeny (CARTA), international experts gave talks on subjects related to the origin of BMHs. Follow-up discussions among faculty and graduate students in our anthropogeny-specialization track indicated a wide range of opinions regarding when the “behaviorally modern” cognitive capacities of humans originated. I therefore presented the aforementioned thought experiment about transporting 1,000 healthy newborn babies from older times into today’s environment—asking how far back in time one could go and still elicit a full BMH cognitive phenotype.

I personally favor ~100,000 years ago, for several reasons. First, most current genetic data point to a common origin of current humans at about that time. Second, the humans who entered the Eastern Mediterranean (the Levant) at that time were burying their dead with funerary items, and transporting perforated shell beads (presumably made into necklaces) over rather long distances. Third, my group’s work suggests a population bottleneck caused by infectious disease just before that time. Finally, despite evidence for cross-fertility with other ancient hominins (including some in Africa), we BMHs remained largely genetically distinct, despite tens of thousands of years of opportunity to mate and mingle into a distinct hybrid species in each locale. While this outcome could have been due to chance, I think it more likely that the initial hybrids were lacking a fully human-like theory of mind, and that the “cognitively sterile” hybrids could not easily incorporate themselves (or their genes) back into the BMH population.

Interestingly, the answers to an anonymous poll of the same faculty and students varied widely among the five possible time periods and populations I suggested (ranging from ~60,000 to ~500,000 years ago), with some respondents including Neanderthals as being equivalent to BMHs. So, even among experts and bright students who had just heard the latest research reports, there was no consensus on this issue. Much more data from many disciplines are required before there is any hope of finding the answer.

A related question is whether there was something cognitively special about BMH minds that allowed us to systematically replace all the other intelligent hominins we encountered as we moved around and out of Africa. And did those cognitively special attributes evolve gradually via typical natural selection—or was there a psychological evolutionary barrier that we BMHs breached on our way to global domination? 

Ajit Varki is Distinguished Professor of Medicine and Cellular Medicine at the University of California, San Diego, codirector of CARTA, and coauthor with the late Danny Brower of the book Denial: Self-Deception, False Beliefs, and the Origins of the Human Mind, which discusses these questions in more depth. Videos of CARTA symposium talks can be found here.