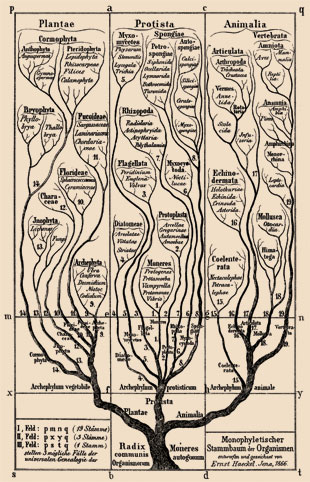 WIKIMEDIA COMMONSEvolution is not concerned with species, but with individuals. The survival and reproduction of those individuals that are best adapted to their environment determine the characteristics of subsequent populations, but neither the process nor the theory requires that these populations be organized into species. The formation of species, when it occurs, is a phenomenon that needs to be explained.

On closer inspection, the very notion of a “species” is difficult to formally define. This has been a matter of debate since before Darwin, who himself concluded that “we shall have to treat species in the same manner as those naturalists treat genera, who admit that genera are merely artificial combinations made for convenience” (Origin of Species, Chapter XIV). Many subsequent authors have proposed more formal definitions, known as species concepts, each useful for particular applications but not without idiosyncrasies.

For example, in sexually reproducing populations,...

Two other species concepts that are frequently employed are ecological species and genetic species. An eco-species is a distinct group of related organisms that perform a specific ecological function, and so occupy a particular niche. The loss of that species from a community means loss of that function, and so identity and number of eco-species are important characteristics of ecosystem health. On a more practical level, the rapid advance of genetic sequencing technologies has focused attention on a species concept based solely on genotype: a genetic species is a collection of organisms whose genomes are very similar to each other, but distinct from those of organisms belonging to other species. The genetic separation of species is known as the DNA barcoding gap.

The biological intuition about species formation is mostly based on observation of birds, mammals, and other larger creatures. However, it is the meiofauna (of body size around 0.05–1 mm) and smaller microorganisms that dominate biodiversity and ecosystem functioning on Earth. It is therefore important to ask if our current understanding of species formation is applicable to these organisms.

One way to approach this problem is through the study of simplified evolutionary models. Analysis of these models can give insights into real-world processes happening over many millions of years that cannot be directly observed. In this context, species formation can be interpreted as a particular instance of the general phenomenon of self-organized pattern formation. Just as a jet of water can break up into little drops, but will do so only under certain conditions, the ancestral tree of life on Earth may, near the tips of its branches, become structured into distinct species when the conditions are right.

Whether or not this happens will depend on the precise criteria for delineating species. In a recent series of articles, we argue that the formation of both ecological and genetic species may be highly dependent on global population sizes. Put simply, in very large populations, organisms that might otherwise belong to the same species can be very distantly related to each other, sometimes to the point of harboring too much genetic variation to occupy the same ecological niche. What’s more, in mature communities in which most niches are occupied, interactions among organisms can have a much bigger role in determining individual survival than the external environment does, making the forces of evolution less coherent. As a result, populous organisms display a range of genotypes and phenotypes, seemingly unconstrained by ecological niches. For these organisms, then, the ecological species concept does not apply and, as a result, clearly identifiable genetic species cannot form either.

Smaller organisms tend to be much more numerous than larger ones—global populations of insect species, for example, can be several million times larger than those of rodents—but the rate of appearance of new mutations is not much different. We predict that at around the millimeter scale of body size and smaller, populations become large enough to prohibit species formation. This is consistent with results of recent work in the field of environmental genomics, in which organisms are collected from environmental samples and parts of their genomes are read using high-throughput sequencing. The resulting sequences are then organized into a hierarchy of clusters, based on genetic similarity. For meiofauna, the outputs of these clustering algorithms reveal a relatively smooth distribution of genomes, which do not fall easily into clearly defined and well-separated groups. The clustering patterns are consistent with the predictions of our model for the case of large population sizes, where species do not form.

Just as evolution does not critically depend on species formation, ecology as a science does not critically depend on it either. Species richness as a predictor for ecosystem functioning, for example, can be replaced by other measures of biodiversity, such as functional or phylogenetic diversity, that do not depend on the species concept. The biggest challenges are likely to arise in the fields of ecological theory and modeling: the functional distinctness of species is the starting point of most theoretical ecology. If species formation among small organisms is indeed less prevalent than currently assumed, an alternative conceptual basis for community ecology is needed. 

Axel G. Rossberg is an ecologist working at the Centre for Environment, Fisheries & Aquaculture Science in Lowestoft, U.K. Tim Rogers is a mathematician at the University of Bath, and Alan J. McKane is a theoretical physicist at the University of Manchester. All three share a deep interest in complex natural systems.