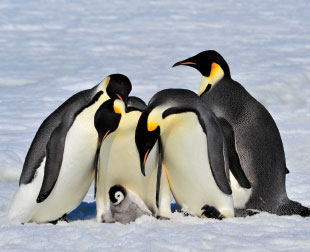 © ISTOCK.COM/VLADSILVERFrom packs of wolves cooperating in prey capture to millions of worker ants toiling their entire lives for the benefit of their sisters and queen, cooperative behaviors pervade the animal kingdom. But such selflessness poses a major evolutionary quandary: How could natural selection favor traits that increase the reproduction of others at an apparent cost to the individuals that express them?

William D. Hamilton provided an initial solution to this problem in 1964 with his theory of kin selection. Hamilton predicted that costly altruistic behaviors could be favored if the individuals receiving help were close relatives of the helper. This is because, from the gene’s-eye view, close relatives have a greater likelihood of also possessing an allele for altruism than unrelated individuals. In fact, the probability that any two individuals share a particular allele is equivalent to their relatedness to each other. By this logic, helpers should...

Indeed, helpers in most cooperative groups are offspring of the breeding pair that stay and help care for siblings rather than leave to breed on their own. Recently, scientists have suggested that genetic monogamy (exclusive reproduction within a pair) plays an integral role in the evolution of helping by ensuring that relatedness between siblings is maximized. When mating is monogamous, helpers are full siblings of newborns, meaning they are as related to these siblings as they would be to their own offspring. Thus, from the perspective of the gene, a helper’s full siblings are as valuable to the spread of the helping allele as the helper’s own offspring; both have a 50 percent chance of carrying the allele. In support of this hypothesis, recent studies have shown genetic monogamy as the ancestral state in evolutionary lineages exhibiting cooperation in a variety of animal taxa, including birds, mammals, and some social insects.

The evolutionary correlation between monogamy and cooperation, however, is also consistent with several alternative, yet previously unexplored, hypotheses. Monogamy and cooperation are similar in many ways. Natural selection favors monogamy, for example, when there are few alternative mating opportunities or when there are substantial benefits to providing biparental care. Similarly, young adult offspring are selected to remain with their families as helpers when independent breeding is difficult or when the benefits of caring for siblings are great. The ecological and demographic factors that reduce mating opportunities for parents, such as limited breeding territories, are thus likely to do the same for helpers. Similarly, factors that increase the value of offspring care, such as high risk of juvenile predation or starvation, could select for cooperation in defense or provisioning by both parents and helpers. Because conditions favoring monogamy may be less extreme than conditions favoring cooperation, monogamy may emerge first. In this case, however, the relationship between monogamy and cooperation is consequential, rather than causal.

Monogamy and cooperation could interact synergistically, with ances­tral social monogamy shaping the social environment in ways that could select for further cooperation.

Social monogamy, in which breeding pairs cooperate but are not necessarily genetically monogamous, is also strikingly similar in form and function to cooperation among other individuals, and adaptations for cooperation between monogamous parents might predispose lineages to more advanced forms of cooperation among other individuals. Adaptations that characterize social monogamy, such as social tolerance, pair bonding, and even increased cognitive capacity in the case of social birds and mammals, are also important in creating and maintaining social interactions that extend beyond the pair. Socially monogamous lineages that express fine-tuned social intelligence, cooperation between social partners, and biparental care of offspring might thus be primed to transition to more-complex social organization under the right circumstances.

Finally, monogamy and cooperation could interact synergistically, with ancestral social monogamy shaping the social environment in ways that could select for further cooperation. For example, if breeding space is limited, the likelihood of young adult offspring successfully competing for breeding opportunities should be much lower in populations where socially monogamous pairs jointly defend territories than in those where singletons occupy and defend breeding space. Here, pair coordination exacerbates preexisting limitations to breeding, further encouraging offspring to stay and help rather than disperse and attempt to breed. Conversely, offspring that stay and help gain higher kin-selected benefits if their parents stay monogamous, and so they may create conditions that reduce either the benefits of or the opportunities for promiscuity.

These additional explanations for the coevolution of monogamy and cooperation are not mutually exclusive with the action of kin selection. Consider the situation where some ecological condition, such as an abundance of predators, selects for both biparental and cooperative care. In this scenario, the risk of predation not only selects for offspring help by increasing the benefits of cooperative defense, but also promotes monogamy by selecting for cooperation and social bonding between parents, leading to increased relatedness between siblings. Previously, researchers considered the increased fitness benefits to relatives and the degree of relatedness between these individuals to be separate, modular components in the determination of offspring help. Now, however, it is clear that these components are likely to be inextricably linked in nature.

This newfound appreciation for the complex coevolutionary dynamics between mating systems and social systems is in line with the emerging field of systems biology. This relatively new area of research is dedicated to shedding light on a variety of complex biological processes, from biochemical interactions that occur within and between cells to ecological interactions that affect demographics and ecosystems. The essence of the approach is that many aspects of the natural world are more than the sum of their parts, whether because some parts interact in unexpected ways or because the phenomenon cuts across multiple temporal or spatial scales. Thus, social creatures such as wolves and ants might engage in their ostensibly selfless behaviors because of a series of ecological influences on both mating decisions and cooperation, as well as feedback between the two that modulates the selection acting on each. Teasing apart exactly how these social patterns arose will take an open mind and keen observation for complex and unexpected evolutionary dynamics.

Jacqueline R. Dillard is a PhD student at the University of Kentucky, where she investigates the coordinated evolution of mating and social systems in insects and birds. She works in the lab of David F. Westneat, who studies the behavioral ecology of mating and social behavior, primarily in birds.