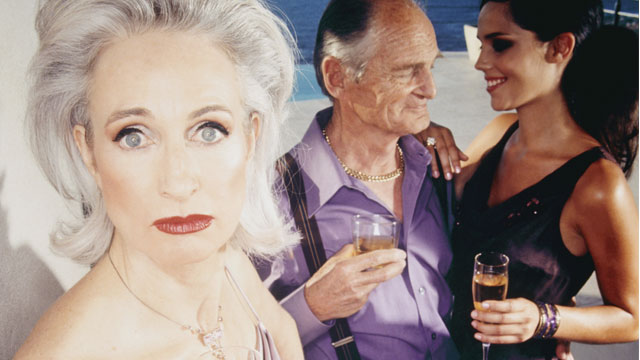 © CLAIRE ARTMAN/CORBISMenopause puzzles evolutionary biologists. After all, avoiding mortality and ensuring reproduction are the two most fundamental tenets of Darwinian natural selection. Theoretically, species should evolve so that individuals live only as long as they reproduce. So why did humans evolve a long adulthood with females becoming nonreproductive about halfway through?

Menopause, quantified as the proportion of expected time in adulthood during which an individual is nonreproductive, is remarkable in humans relative to most other species in the animal kingdom. Among the many hypotheses that have been proposed to explain the origin of menopause, two have garnered substantial attention. According to the most popular explanation, known as the grandmother hypothesis, older females increase their genetic contribution to future generations by assisting in rearing their grandchildren rather than continuing to bear and rear children of their own. This scenario requires that older females become grandmothers twice for each...

Dissatisfied with either explanation on its own, my colleagues Richard Morton and Rama Singh and I recently published a novel hypothesis, formulated on the basis of a thought experiment involving the effects of a change in mating behavior (PLOS Comp Bio, 9:e1003092, 2013). Imagine a population in which individuals lived long lives, throughout which they were able to reproduce. In this scenario, any gender-specific mutations that diminished fertility late in life would be selected against. If a mating behavior change were introduced, however, such that females reproduced only at a young age, natural selection would become relaxed in older females. Consequently, effects from the female-specific mutations that diminished fertility late in life would become effectively neutral, and such mutations would accumulate over time. Eventually, female fertility would decline with age; in other words, menopause would evolve.

Theoretically, species should evolve so that individuals live only as long as they reproduce. So why did humans evolve a long adulthood with females becoming nonreproductive about halfway through?

To formalize this new hypothesis, we developed a computational model and assessed, through computer simulation, the idea that menopause originated as a consequence of a change in mating behavior. Data that mimic real-world survivorship and fertility were generated by evolving virtual populations. From a behavioral perspective, the mating-behavior change that was introduced in the computer simulations could be viewed as a male preference for young females or as young females outcompeting older females for access to males. Ultimately, the model showed that, when only young females mate, menopause arises. Intriguingly, the reverse scenario also holds true: if only young males mate, then male menopause will arise—an observation that could be  tested by investigating whether menopausal male fruit flies could be evolved in a laboratory setting.

This “change in mating behavior” explanation is a nonadaptive hypothesis for the origin of menopause: it requires neither inclusive fitness benefits through which older, nonreproducing women assist younger women in their reproductive efforts (i.e., the grandmother hypothesis), nor an assumption that fertility always diminished at a typical, prescribed age in older women and remained so despite increased survival through extended reproduction by males (i.e., the life-span artifact hypothesis), possibly accompanied by increased male fitness. A change in mating behavior allows alleles that diminish fertility to accumulate in an effectively neutral manner. Similar genetic mechanisms are theorized as the ultimate causes for other conditions, including senescence.

Of course, the hypotheses for why menopause evolved are not mutually exclusive, but the neutral, change-in-mating-behavior hypothesis, itself, provides a sufficient, mechanistic explanation for how menopause could arise. Why older women historically stopped reproducing and the precise temporal relationship between the origin of grandmothers and extended life spans in human populations are puzzles that remain unsolved, but that will now invite much speculation.

From a practical perspective, real-world counterparts for deleterious mutations that arise during the computer simulation, if such mutations do exist, might have effects on traits other than fertility. So, if corresponding candidate mutant alleles responsible for the onset of menopause were suspected to reside in human genomes, then the novel hypothesis may be received as a challenge to researchers to identify and study those genes, ultimately promoting research in human health.

Jon Stone (aka Doc Roc) is an associate professor at McMaster University in Hamilton, Ontario, where he holds a SHARCNET Chair in Computational Biology and is associate director of the Origins Institute.