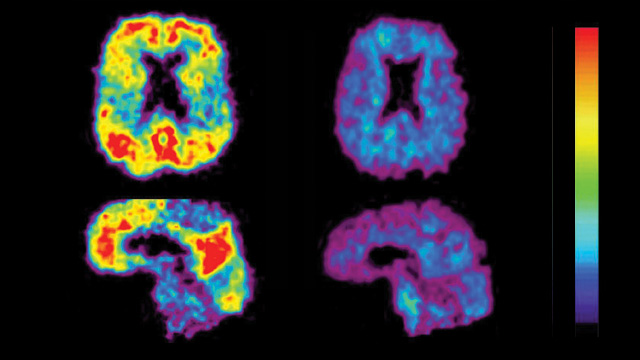 READY FOR USE IN CLINICAL TRIALS: Comparative PET scan views of a patient with Alzheimer’s disease (left) and an elderly person with no cognitive impairment (right). The red and yellow areas show high concentrations of fluorescent dyes developed to detect amyloid plaques. UNIVERSITY OF PITTSBURGH, PET AMYLOID IMAGING GROUP

There’s been a lot of discussion about the need for biomarkers to diagnose and monitor the progression of Alzheimer’s disease (AD). That discussion should continue, for sure, but the aging of our society means that researchers in the AD field need to move from talk to action.

Although some biomarkers have been under study for more than a decade, the continuing absence of truly effective therapies for preventing, moderating, or curing AD spurred the publication in December of a special supplemental issue of Neurobiology of Aging about the latest research and expert opinion on AD biomarkers in an effort to...

At least three AD biomarkers are ready to be incorporated into AD clinical trials.

Biomarkers for AD can be divided broadly into those that identify aspects of the underlying molecular pathology and those that reflect the “downstream” consequences of that pathology. The neuropathological hallmarks that define AD are the amyloid plaques and neurofibrillary tangles invariably found in the brains of AD patients upon autopsy. Amyloid plaques develop when the amyloidß peptide of 42 amino acids (Aß42) accumulates in increasingly insoluble forms, and neurofibrillary tangles develop when abnormal tau proteins accumulate inside neurons and form insoluble filaments. Both Aß42 and tau can be measured in cerebrospinal fluid. Positron emission tomography (PET) scans that use special dyes to detect amyloid plaques represent another biomarker of the basic neuropathology of the disease.

Contributors to the Neurobiology of Aging special issue concluded that at least three AD biomarkers are ready to be incorporated into AD clinical trials. These biomarkers—structural MRI, brain amyloid imaging, and cerebrospinal fluid levels of Aß42 and tau—should be used both for selecting AD patients for enrollment and as surrogate outcome measures in Aß42 clinical trials, along with clinical assessments such as the Clinical Dementia Rating (CDR), assessments of activities of daily living (ADL), and neuropsychological tests.

Clinical trials will benefit from the use of AD biomarkers because they offer greater precision than cognitive assessment tools in measuring the progression of AD, and allow for the use of fewer trial subjects (who are correctly diagnosed) to be studied for shorter times, thus reducing the cost of the trials. For example, measuring AD biomarkers can facilitate selective enrollment of “relatively rapid decliners,” meaning fewer participants and potentially less time to demonstrate treatment effects. Biomarkers also enhance an investigator’s confidence that patients are accurately diagnosed with AD.

The above-mentioned biomarkers have been evaluated in AD primarily for three purposes: diagnosis—to help confirm that a patient’s cognitive symptoms are specifically due to AD; screening— to assess whether asymptomatic or very early symptomatic individuals indeed have the condition; and prognosis—to predict whether and how symptoms will appear and progress.

The three biomarkers can also serve as endpoints in clinical trials, to assess an effect of a therapeutic agent on the progression of AD, to provide information needed by sponsors in deciding whether to invest in a larger study using clinical endpoints, or to help provide evidence of a treatment’s disease-modifying effects.

Because biomarkers of AD neuropathology and of the state of the brain likely have greater precision in measuring biological change than do clinical and cognitive-assessment tools, there is growing interest in the role they could play as correlates of, or perhaps replacements for, clinical endpoints in the future approval of AD therapies by regulatory agencies.

The AD field has been understandably concerned about the rate of progress of clinical research, in part due to the prominent failure of three late-phase clinical trials of compounds developed to modify AD dementia. Tramiprosate (Alzhemed) was a putative anti-Aß-aggregation compound, but this mechanism was not proven in phase 2 trials and the phase 3 results showed no clear evidence that it had entered the central nervous system and engaged the Aß target. R-flurbiprofen (Flurizan), a putative gamma-secretase modulator derived from a nonsteroidal anti-inflammatory drug, lacked potency and did not enter the brain well. In the interrupted phase 3 study of semagacestat, a gamma-secretase inhibitor, patients were not fully dosed due to significant toxicity and adverse events. None of these studies relied systematically on biomarkers as entry criteria or surrogate endpoints.

It was the cumulative disappointment in the wake of these trials that helped encourage the Alliance for Aging Research, in cooperation with the US Food and Drug Administration, to assemble the Alzheimer’s Disease Biomarker Expert Working Group, a team of leading researchers that analyzed extant data and published the Neurobiology of Aging special issue. The collected papers urge the routine use of biomarkers to assist in patient selection for AD trials and to assess the effectiveness of therapeutic treatments. At the same time, the papers discuss what needs to be done to standardize various biomarker assays in order to minimize interlaboratory variability and to establish uniform protocols for sample collection.

We hope these collected studies represent a tipping point, and send a message to clinical researchers as well as to regulators that certain biomarkers already hold much promise to improve the process of testing new disease-modifying therapies for AD. We encourage academic investigators, industry sponsors, and the FDA to routinely include biomarker use in designing clinical trials that have the goal of slowing or preventing AD. Because AD has such a long asymptomatic phase, subjects must be treated when they have only mild symptoms of dementia, or even before symptoms appear. This imperative puts AD biomarkers—those now evaluated as useful and those yet to be identified—front and center as vital tools for screening, early diagnosis, and monitoring of this devastating and fatal illness.