If you stretch out your arms or legs and compare their length, you will, in most cases, find that they are very similar. Indeed, the external features of our body are reliably symmetrical; a noticeably asymmetrical feature is perceived as an abnormality.

Little attention has been given to how limb symmetry is achieved, even though much is known about how bones themselves grow. Limb structures are specified in the embryo and then grow for some 16 years. We do not even know why they finally stop growing or why their growth rate varies at different ages. Arm length matches with extraordinary accuracy, varying by no more than about 2%. Yet much about how this finely tuned growth is controlled remains a mystery. There is no evidence for communication between the right and left limbs: if a child has an accident that causes one limb to have reduced growth, the... 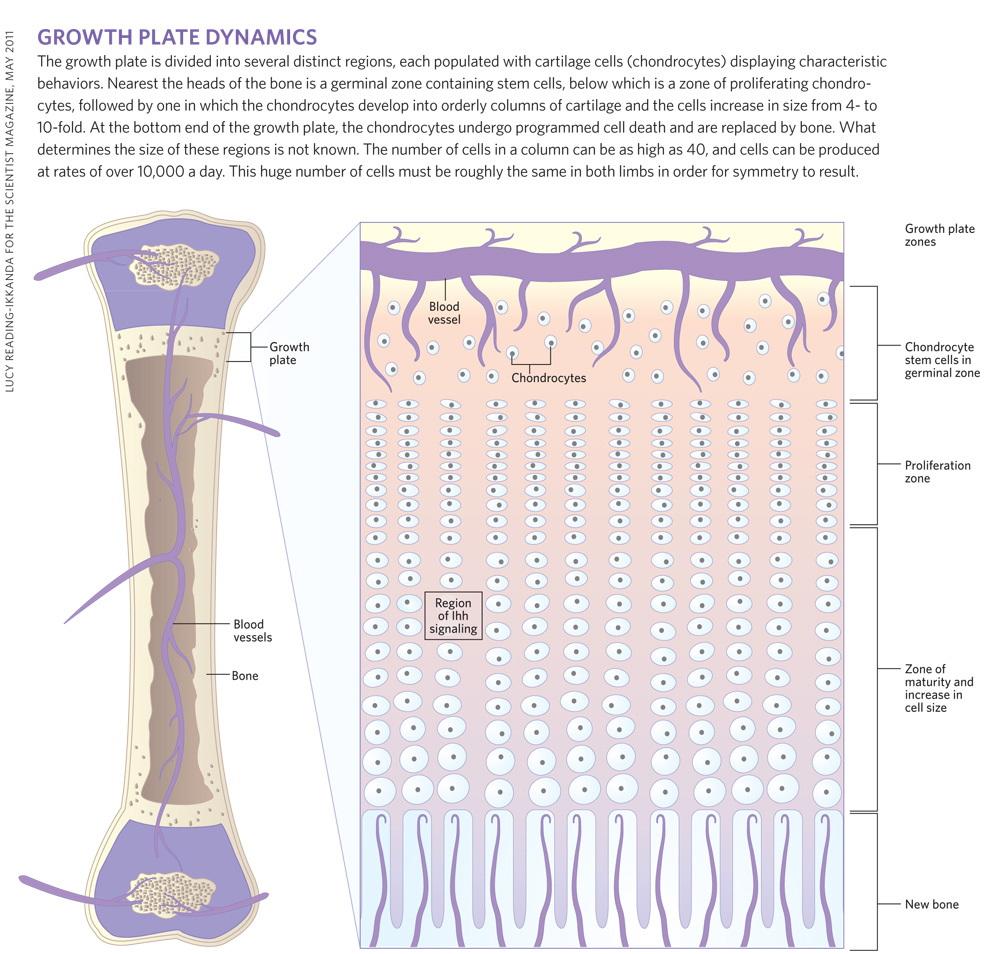 The extension of the limbs is due to longitudinal growth of bones. Growth plates at each end of the long bones are where this extension is carried out on the cellular level. How does symmetry emerge, given the tens of thousands of cells in each growth plate whose proliferation and size must be controlled? The sheer number of cells may act to cancel any effect of small differences in cell behavior. One might test this possibility by using computer models that vary the behavior of cells populating the different zones of the growth plate to see which conditions yield reliable and consistent growth. Here are four other unknowns that still bedevil the explanation of limb symmetry, along with possible experiments to address them—a hard, but solvable, problem.

Indian hedgehog (Ihh) is a protein that is master regulator of chondrocyte behavior in the growth plate. Ihh directly stimulates chondrocyte proliferation and, in concert with parathyroid hormone?related protein (PTHrP), forms a feedback loop controlling cell proliferation and the boundary at which the cells cease proliferating and begin to hypertrophy. Do these processes have to be kept at the same levels in opposite limbs? One could increase the concentration of either the regulator or the hormone on the left or right growth plate to measure the long-term effects. This might be done experimentally by implanting a few cells that have been genetically modified to produce an additional source of one of these two signaling proteins.

A rigorous comparison of the growth plates in corresponding limbs—the relative size of the various regions of the growth plate, the cycling rate of cells populating each region, the height of the chondrocyte columns—and the effect on bone growth of varying any one of these would help elucidate how symmetry is attained.

Many important features of the growth plate have no clear molecular explanation, such as the determinants of the polarity of proliferative columns and of the boundaries between the various regions. It would be very difficult, but possibly rewarding, to culture growth plates, as this would open up new ways of experimenting with them.

The cessation of bone growth appears to be controlled by an intrinsic program that is related to cell proliferation. If stem cells in the growth plate have a finitely determined proliferative capacity—some method for counting how many times the chondrocyte has divided—isolating growth-plate stem cells at different stages during bone elongation and testing their behavior in cell culture might reveal different intrinsic growth rates at different ages. If that were the case, one could investigate the molecular basis for this behavior.

Lewis Wolpert is emeritus professor of cell and developmental biology at University College London. His research interest is the development of the embryo with an emphasis on pattern development.