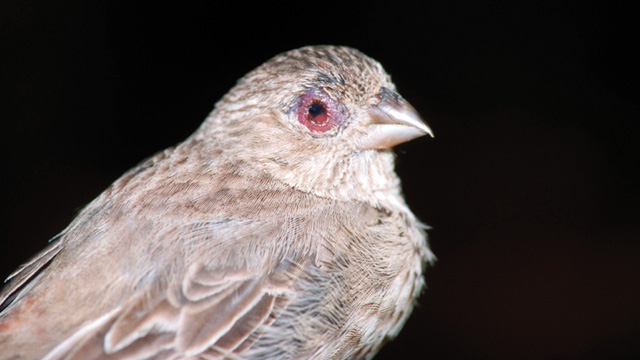 © GARY W. CARTER/CORBISEvolution is supposed to occur slowly. But pathogens play by a different set of rules. Novel strains of bacteria and viruses can appear suddenly, or even jump from one host species to another to cause a disease outbreak, as is currently happening in China with an H7N9 strain of influenza virus. A central question in the study of emerging disease is whether novel pathogens will become more or less virulent toward their hosts the more time they spend with them. According to a new study from our group and others, at least one newly emerging pathogen—the bacterium Mycoplasma gallisepticum, or MG to those that study it—does both.

Our study, just published in PLOS Biology (11:e1001570, 2013), shows that MG, which affects the eyes of finches found in backyards across most of the United States, has rapidly and repeatedly evolved to become both more and less...

The research provides some of the first clues suggesting that patho­gen evolution can happen very rapidly, repeatedly, and also reversibly: under some conditions, the pathogen evolves to kill hosts more rapidly, while under others, virulence is attenuated.

Early work on MG in house finches started with Cornell University’s André Dhondt, who brought together a group of ornithologists, veterinarians, ecologists, mathematical modelers, and pathologists to examine the emergence of the disease, which causes inflammation around birds’ eyes that is often severe enough to cause temporary partial blindness, making it much harder to find food and avoid predators. The disease was first seen in house finches in 1994; its cause was later identified as MG by team member David Ley at North Carolina State University. Because the infection is easily visible, Cornell’s Lab of Ornithology decided to recruit the public’s help in monitoring the disease’s spread. They asked people to record the numbers of house finches visiting their backyard feeders each month and to note whether the birds had visible eye inflammation. Initial reports suggested that the spread of the pathogen had caused the house finch population in the U.S. to decline by more than 50 percent in just over 4 years—a loss of more than 40 million birds!

A selection pressure of this magnitude is a powerful stimulus for the evolution of host-pathogen interactions, and the findings immediately stimulated the interest of Dana Hawley, who initially worked on MG for her thesis at Cornell before joining the faculty at Virginia Tech in Blacksburg. Hawley worked with Dhondt’s interdisciplinary team to investigate the pathogen’s virulence as it spread down the eastern seaboard to Atlanta, across the northern plains to Oregon, and then down the coast of California.

Intriguingly, outbreaks of disease like those observed in the eastern U.S. were not initially detected by citizen scientists in the western half of the country. To understand why, the team turned to bacterial samples collected from the disease’s earliest emergence, as well as samples obtained at different times and locations as it spread across the States. Laboratory pathology experiments found that the different strains showed very different levels of pathogenicity that changed in consistent ways across time and space: strains sampled in East Coast birds consistently showed high virulence. In contrast, the strains of the pathogen that spread across the continent showed reduced virulence, but once they became established in the West, there too MG infection became more virulent. The work eloquently demonstrates that evolution can occur very rapidly and that the evolved virulence is very dependent upon whether the pathogen is competing in a local population or spreading and colonizing new areas.

The study also illustrates that evolution in the pathogen occurs thousands of times more rapidly than evolution in the host. Although we would expect selection to occur more rapidly in the pathogens due to their much shorter generation times, evolution of MG has occurred consistently and repeatedly over the 15 years that this multidisciplinary team has been studying it. Even though the finches have a relatively fast generation time (compared to humans), they have not yet shown any convincing evidence of an evolutionary response that matches that observed in the pathogen.

Disconcert­ingly, the more dangerous pathogens are those that kill more slowly, such as HIV, which has taken the lives of more people than all other emerging diseases put together.

All of this work has important implications for other emergent diseases. The research is unique in that the pathogen spread has been monitored in both space and time since it first emerged from domestic poultry farms on the Delmarva Peninsula near Baltimore; most other pathogens that threaten humans or domestic livestock are eradicated by quarantine as swiftly as possible after we realize the threat, so we rarely have time to see the evolution of the pathogen. Most of the emergent pathogens we strive to eradicate—such as SARS, Ebola, avian influenza—usually kill their hosts so quickly that it hinders their ability to infect new hosts. Disconcertingly, the more dangerous pathogens are those that kill more slowly, such as HIV, which has taken the lives of more people than all other emerging diseases put together. Such viruses are characterized by a long incubation period during which they can mutate and evolve to be more or less virulent, depending on the conditions to which they are exposed in different host populations.

The studies of MG evolution in the eyes of a finch are central to the whole debate on emerging diseases, as they provide deep insights into the speed at which pathogen evolution occurs and the factors that cause increases or decreases in virulence. They also provide a powerful example of evolution occurring consistently and rapidly in backyards throughout the United States.

Andrew Dobson is a professor at Princeton University. His research focuses on wildlife pathogens that infect multiple host species, including MG in house finches and other zoonotic diseases in East Africa.