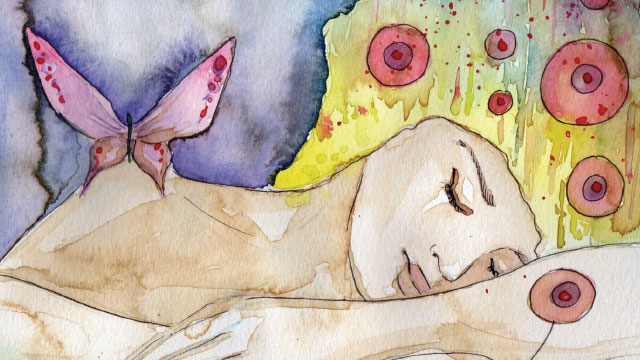 Sleep researchers must grapple with a major conundrum: we don’t really know what sleep is. This may come as a shock to the uninitiated, but a conclusive definition of sleep still eludes scientists and probably will continue to do so until the function of sleep is fully established. That’s not to say science doesn’t have a working definition of sleep.

A cortical definition of sleep

Researchers have used electrophysiology to characterize sleep since the middle of the 20th century. In animals with a developed neocortex, including mammals and birds, sleep states manifest as telltale patterns of brain activity, which can be detected by electroencephalography (EEG), along with distinct eye movements and changes in muscle tone. Rapid eye movement (REM) sleep and non-REM sleep are differentiated by behavioral attributes and characteristic patterns of electrical activity in the cortex. But it is impossible to distinguish REM sleep from the...

Using this electrophysiological working definition of sleep, researchers have made major progress in deciphering the mechanisms regulating sleep and wake states, and it is still the most precise method to quantify sleep in animals that possess a neocortex. This definition is so well-entrenched in the sleep research community that many of us have forgotten how deceptive and restrictive it can be. First, EEG only records signals from the neocortex, which covers and hides the rest of the brain, where the actual neuronal loci of sleep generators and regulators reside. Second, because EEG alone cannot distinguish REM/PS sleep from the awake state, it’s clear that recording the surface of the brain is not enough to define sleep.

A behavioral definition of sleep

In the early 1980s, Irene Tobler of the University of Zurich established a broader definition of sleep applicable to all animals, from cockroaches to elephants, using six behavioral criteria: reduced mobility, site preference (e.g., bed), specific posture (e.g., lying), rapid reversibility (unlike coma), and, most importantly, increased arousal threshold (no perception of the environment) and homeostatic control (sleep rebound after sleep deprivation). As of today, using those six criteria, researchers have identified sleep in hundreds of vertebrates and invertebrates, and there is currently no clear evidence of any animal species that does not sleep.

Furthermore, Tobler’s behavioral criteria have allowed the recent introduction of well-established (and neocortex-lacking) genetic models such as Drosophila, C. elegans, and zebrafish. Still, behavioral criteria are limited because they do not allow the quantification of sleep as do EEG and muscle measurements. And so these sleep studies mostly rely on assessments of movement. Determining whether a fruit fly is asleep, for example, requires physically disturbing it and likely waking it up in the process. Only a brain recording–based definition of sleep can allow proper quantification without disrupting an animal’s natural behavior.

Toward a subcortical definition of sleep

Here is the paradox: although it seems sleep is conserved across the animal kingdom, our most precise definition of the phenomenon relies on recordings of the neocortex, the least-conserved part of the vertebrate nervous system (and altogether absent in invertebrates). Using electrophysiological and behavioral criteria, major progress has been made in deciphering the mechanisms regulating sleep and awake states in vertebrates. Researchers have pinpointed brain nuclei, circuits, and neurotransmitters involved in sleep-wake regulation, and they’ve identified centers of state-switching in the brain stem and hypothalamus, structures conserved across all vertebrates.

Instead of relying on the neocortical output of sleep, a definition of sleep should emerge across vertebrates based on the activity of the subcortical structures generating and regulating sleep. A region of primary interest is the brainstem (a.k.a. hindbrain), as it contains regions critical for sleep induction (pons), arousal (locus coeruleus, parabranchial nucleus, and others), and muscle-tone control. Decades of developmental biology studies using many vertebrate models, including mouse, chicken, quail, frog, and zebrafish, have demonstrated the strong conservation of the neural segments (rhombomeres) and circuits composing the vertebrate hindbrain/brainstem. With the development of whole-brain imaging methods allowing the comparison of two distant vertebrate sleep models, such as mouse and zebrafish, we should soon be able to define sleep for all vertebrates based on the dynamics of conserved networks in deeper brain regions.

Toward a synaptic and functional definition of sleep

While a subcortical definition of sleep across vertebrates would already be a leap forward, it would still not easily apply to the invertebrate nervous system, and hence would not provide a truly universal definition of sleep for all animals. Evolutionary conservation lends support to the hypothesis that sleep serves a fundamental physiological need, and the best way to define sleep would be to identify this need. So instead of relying on an output (EEG, behavior) or a regulatory (neuronal circuits) definition of sleep, the ultimate definition will directly answer the simple question: why do we sleep?

Sleep likely has multiple functions, but a large and growing body of evidence supports a primary role for sleep in the regulation of nervous system plasticity. Sleep deprivation impairs performance on motor and cognitive tasks, and sleep strengthens cognitive functions, memory consolidation, and learning.

Importantly, work in mammals, nonmammalian vertebrates (zebrafish), and invertebrate models has highlighted the importance of sleep for synaptic remodeling. In view of these commonalities, sleep might be compared to a neurodevelopmental state: a functional state that has been preserved from simple circuits to neocortical complex networks. In this hypothesis, the sleep state(s) allows critical plasticity mechanisms to be brought online to facilitate the making and breaking of connections within neural circuits that, during the unpredictable synaptic environment of the wake state, could disrupt behavior or learning. With the experimental knowledge gathered to date, it is safe to acknowledge that sleep, on a synaptic level, is a specific type of plastic state likely conserved across circuits, developmental stages, and evolution. This critical state is not only important for the proper function of the nervous system, but is itself dependent on the prior activity and connectivity of the nervous system.

In the years to come, experiments focusing on the synaptic changes specific to sleep across the entire brain should uncover the core ancestral function of sleep and establish a definition that not only could apply to any species but also to most types of neuronal networks requiring enhanced plasticity. (See “Sleep’s Kernel”)

It will also be interesting to see whether we can identify neocortical REM/PS and non-REM synaptic sleep signatures in nonneocortical plastic networks, allowing a molecular definition of non-REM sleep and REM/PS. It may sound provocative today because REM/PS is often associated with dreaming and is at the root of mammalian-centric conceptions of sleep, but REM/PS could have an ancestral form in nonmammalian and invertebrate species in its most reduced synaptic form.

Philippe Mourrain studies neurobiology and gene regulation at the Stanford Center for Sleep Sciences and Medicine.