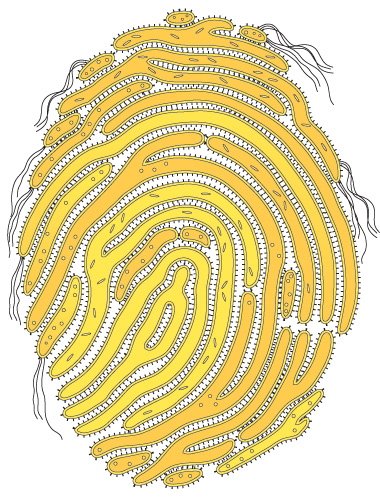 Bacterial Fingerprint: There is the possibility that microbial DNA may contain even more information about a person than does their human DNA.LUCY READING-IKKANDA

We are human beings. Normally, one might take this to mean that, at least on a biological level, we are defined by our own genome. But living in and on the human body is an ecosystem of microorganisms that outnumber our own cells by at least a factor of ten. It is estimated that there are 100 times as many microbial genes as human genes associated with our bodies. Taken together, these microbial communities are known as the human microbiome. Recent technological and scientific advances, mainly in the field of metagenomics, are rapidly enriching our knowledge of the genomes and functions of many of these microbial communities.

The ultimate aim of much of this research is to discover how perturbations of the microbiome might be related...

A key premise of some microbiome researchers is that the human genome coevolved with the genomes of countless microbial species. If this is the case, it raises deep questions about our understanding of what it really means to be human. Typically, we draw a distinction between environmental and genetic factors in understanding human traits and the development of disease. What precisely is meant by “environmental” varies dramatically across disciplines. Irrespective of how environmental factors are conceptualized in a given study, a common focus is their interaction with stable genetic factors. Traditionally, the microbial communities in and around us would be counted towards the environmental, rather than the genetic side of this equation. Given recent findings from human microbiome research, however, this classification may need to be reconsidered. If the microbiome, on a species level, coevolved with the human genome and, on an individual level, is a unique and enduring component of biological identity, then the microbiome may need to be thought of more as “a part of us” than as a part of the environment.

The human microbiome may need to be thought of more as “a part of us” than as a part of the environment.

There are practical ethical implications associated with these somewhat philosophical considerations. Over the past few decades a strong ethical position has emerged regarding manipulation of the human genome. In most jurisdictions it is deemed unethical (and illegal) to alter a human genome in such a way that these changes might be passed on to offspring. There are several arguments supporting this position, an important one being to safeguard the right of the child to an “open future.” Because the consequences of even ostensibly benign genetic manipulations cannot be predicted with certainty, it is currently deemed unethical to make choices on behalf of a child as it might lead to permanent changes to its biological identity. This reasoning underlies the prohibition in many countries against manipulation of germ-line DNA. An important question thus arises about how permanent certain changes to the human microbiome might be, especially to the microbiomes of infants and children, and whether such changes could be transmitted to offspring.

Planning for the future

We alter the mix of our microbial genomes all the time, through changes in our diet and surroundings and, significantly, every time we take antibiotics. It is currently not known how permanent these and other changes to the microbiome are. Certainly some changes are very transient, with the microbiome eventually returning to a fairly stable state. However, it is unclear just how stable the microbiome really is across a person’s lifespan. There seems to be an emerging scientific consensus that there is a critical period in infancy and early childhood during which the microbiome initially develops and gains a certain degree of stability. Neonates emerge from a sterile uterine environment and are immediately colonized by microbes from the baby’s environment, beginning with the birth canal or, in the case of cesarean section, the mother’s skin, which hosts a significantly different bacterial community. It is thus possible that, starting with the mode of birth, early childhood exposure or lack of exposure to certain microbial communities may have important implications for health and illness later in life. For example, researchers in British Columbia are currently investigating the possible role of early childhood use of antibiotics in later development of asthma.

More important in the context of ethical considerations is the possibility that if the adult microbiome is indeed relatively stable, then such early childhood manipulations of the microbiome may be used to engineer permanent changes that will be with the child throughout life. There is thus the potential that an infant’s microbiome may be “programmable” for optimal health and other traits. For example, might we program a baby’s microbiome to decrease chances of becoming obese? Or might we program it such that the person will always have a dislike of alcohol? While such manipulation is likely to be motivated by many good intentions, it does raise the familiar specter of “designer” babies, and the ethical problem of making choices for infants and children that may permanently affect their biological identity.

The issue of how stable an individual’s microbiome is over time also raises other ethical questions. For example, because human DNA is a unique identifier of individuals, there are many safeguards for ensuring the confidentiality of genetic data. In many jurisdictions laws have been enacted to prohibit insurance companies from taking the results of genetic tests into account in calculating premiums. There is also much controversy about the possibility of law enforcement agencies acquiring genetic data collected for health research. Some early studies suggest that a person’s microbiome may also be a unique identifier. And there is the possibility that microbial DNA may contain even more information about a person than does their human DNA. For example, a person’s microbiome signature may contain information about his or her country or region of origin, and might even prove presence in a certain place, if soil or water microbes unique to that location are detected. This kind of information may be sensitive for many reasons, most notably because of the obvious value such information might have for law enforcement purposes. Ethical challenges also arise, for example, in ensuring the privacy and confidentiality of individuals whose microbiome is analyzed for research purposes.

At the moment, many of these considerations are hypothetical. However, as human microbiome research progresses, these questions will become increasingly salient. And as scientific consensus emerges on such critical issues as the stability of the microbiome and the long-term implications of infants’ exposures to antibiotics and probiotics, corresponding advances need to be made in thinking about the ethical implications and frameworks to be developed.

Kieran O’Doherty is Assistant Professor in the Department of Psychology, University of Guelph, Canada. His current research program focuses primarily on the social and ethical implications of emerging biotechnologies and the use of public deliberation to help inform policy. For a longer discussion about the ethical, legal, and social issues raised by human microbiome research, see  A.K. Hawkins, K. O'Doherty, " 'Who owns your poop?': insights regarding the intersection of human microbiome research and the ELSI aspects of bio banking and related studies," BMC Medical Genomics, 4:72, 2011.