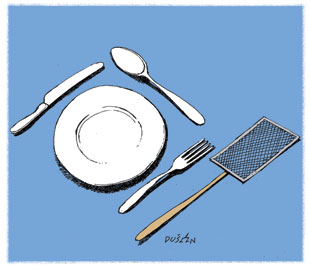 DUSAN PETRICICAs the human population grows, it is ever more important to temper our levels of consumption of the Earth’s dwindling resources. Humans currently consume at least 40 percent of potential terrestrial productivity, and some 30 percent of the land on Earth is used to pasture and feed livestock. Food reserves are the lowest they’ve been in 40 years, yet—thanks to an expanding population that the United Nations (UN) expects to grow to more than 9 billion by 2050—the demand for food will increase dramatically over the coming decades. Climate change, reduced productivity of agricultural lands, overfishing, dwindling freshwater resources, pollution from fertilizers and pesticides, and a host of other factors mean that this population increase will place a disproportionate burden on Earth’s ecosphere. Something has to change.

One possible solution exists literally right under our noses, as well as below our feet and all around us: insects....

Indeed, the call for using insects to improve human food security has gotten louder in recent years. Since about 2004, the UN Food and Agricultural Organization (FAO) has been interested in the use of insects as alternative food sources. As a result, FAO has organized two international meetings on this topic, bringing together researchers, practitioners, and industry representatives from around the world to discuss the feasibility and benefits of insects as a food source: a 2008 workshop in Thailand, which led to the important book Forest Insects as Food: Humans Bite Back, and a technical consultation that I attended in January 2012 at FAO headquarters in Rome. While the attendees recognized that much government and industry backing will need to be garnered to support the widespread implementation of insect-based diets, there was an air of optimism that insect-based food products can realistically become an important part of our future.

Animals, including insects, are important or even sole sources of numerous necessary nutrients, such as the eight essential amino acids, vitamin B12, riboflavin, the biologically active form of vitamin A, and several minerals. (See table below.) Insects are particularly high in protein, with levels comparable to beef and milk. House crickets, for example, contain approximately 21 grams of protein per 100 grams of cricket, while ground beef contains about 26 grams per 100 grams of meat and powdered whole milk contains about 26 grams of protein per 100 grams. Insects are also particularly rich in fat, and can thus supply a high caloric contribution to the human diet, particularly in famine-stricken areas of the world.

Eating insects instead of cattle is also good for the environment. Insects can be produced more sustainably and with a much smaller ecological footprint than vertebrate livestock. They are very efficient at transforming a wide variety of organic matter into edible body mass. For example, cows consume 8 g of feed to gain 1 g in weight, whereas insects can require less than 2 g of feed for the same weight gain (Science, 327:811, 2010). This is partly due to the fact that insects are poikilothermic, or “cold-blooded,” and thus use less energy to maintain body temperature. This efficiency reduces the amount of animal feed needed to generate the same amount of “meat,” cutting the amount of water used for irrigation; the area of land dedicated to growing food for livestock; and the use of pesticides that can be expensive, harmful to the environment, and pose a risk to human health.

Additionally, many insects, such as flies, crickets, grasshoppers, and beetles, can consume agricultural waste or plants that humans and traditional livestock cannot. By converting biomass that is not consumable by humans into edible insect mass, insects don’t compete with the human food supply, as do vertebrate livestock such as cows and chickens, which are primarily fed with grain and corn.

Insects are also easy to farm in large quantities using very little space. Compared to many other animals, insects have substantially higher fecundity—they reproduce more prolifically—and shorter life spans, so they can be grown rapidly. For example, house crickets can lay 1,200–1,500 eggs in a 3- to 4-week period, whereas beef cattle require about four breeding animals for each animal marketed. Insects also use much less water than vertebrate livestock because they obtain hydration directly from food. Finally, insects give off lower levels of greenhouse gases than cows.


NUTRITIONAL CONTENT OF INSECTS
COMPARED WITH BEEF AND MILK

Insects make up the largest and most diverse group of organisms on Earth, with more than 1 million species described and 4–30 million species estimated, living in every niche inhabited by humans and beyond (Nat Prod Rep, 27:1737-57, 2010). This diversity makes them a safer bet for future food security than vertebrate animals such as cattle, fowl, or even fish, which are increasingly susceptible to disease and overharvested from the wild. Because there are insects of some sort on nearly every patch of land on Earth, chances are that some local species in every area can be caught or farmed as human food without transporting nonnative species into the area. The UN FAO estimates that there are already more than 1,400 species of edible insects currently consumed by people; other estimates put that number over 2,000.

When it comes to producing foods made from insects, the sky’s the limit. Once the technologies are developed to produce insect-based food ingredients, they can be incorporated into numerous consumer items, such as meat substitutes and protein-fortified dry products, including cereals, bars, and snack foods. There is already an increasing market for insect-based food products worldwide. Some US restaurants, particularly those serving Latin American and Asian cuisine, are increasingly offering insects on their menus. Additionally, insect biomass may hold potential for high-value products such as food additives, nutritional supplements, antimicrobials, biomaterials, and more (Nat Prod Rep, 27:1737-57, 2010). Products made of chitin from insect exoskeletons—left over after food processing—may prove to be yet another valuable resource, possibly generating enough revenue to subsidize the insect-based food industry.

In summary, insects hold great potential to contribute to global food security. They present a substantial opportunity to provide much-needed animal-sourced nutrients, particularly to the developing world. The potential for insects to contribute to human well-being and sustainability is dwarfed only by the amazing diversity and adaptability demonstrated by these magnificent creatures in nature. 

Aaron T. Dossey is a biochemist, entomologist, and founder and owner of All Things Bugs, a biotech R&D company dedicated to insect-based applications including insect-based foods.