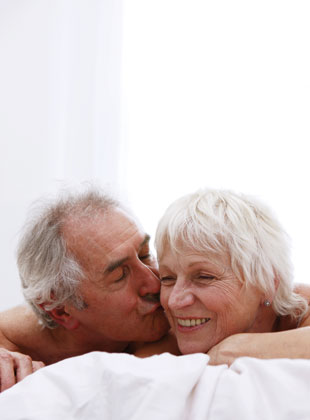 © JOHN SLATER/CULTURA/CORBISThe late statistician George E.P. Box, who famously wrote that “all models are wrong, but some are useful,” also wrote that “science is a means whereby learning is achieved, not by mere theoretical speculation on the one hand, nor by the undirected accumulation of practical facts on the other, but rather by a motivated iteration between theory and practice.”

Richard Morton, Jon Stone, and Rama Singh  at McMaster University in Ontario, in their recent article in PLOS Computational Biology (9:e1003092, 2013), present a mathematical model exploring whether menopause could evolve as a result of male preferences for younger mates. Their model imagines that early in human evolutionary history, women remained fertile well into their 70s and even 80s, but men had a strong fixed preference for mating with younger women. The older women thus remained mateless, therefore gaining little fitness by retaining fertility, and as...

Some facts: our female great-ape relatives experience loss of fertility near the end of their life spans, at just about the same chronological age human women do, implying that it is highly unlikely that our female ancestors reproduced at ages later than women do now. Sustained selection for later reproduction, were it to occur, would have had to overcome serious physiological and phylogenetic constraints. And far from being a starting point for human evolution, the preference of men for younger women is a peculiarly human trait, not something we got from our distant ancestors. We know this because most primate males preferentially mate with older, more experienced females. Given this, it seems evident that male preference for younger mates evolved as a result of the long human postfertile life span, and not the other way around. That is, if our ancient foremothers lost fertility as they aged, as women do now, males would be expected to evolve a preference for the younger mates who would be more likely to produce viable offspring.

Just as the evolutionary assumptions of the model ignore what we know about evolution, its social assumptions ignore what we can easily see in human societies throughout history: older women still have lovers. Older women may be underrepresented in advertising and discriminated against in the workplace, but very few of them are unable to gain access to sperm, and very many are in long-term sexual relationships with committed partners.

One cause of confusion, we believe, is revealed by Morton and colleagues’ choice of language. They don’t distinguish between reproductive senescence (the decline in fertility with age), menopause (the physiological cessation of cycling that occurs after fertility has already reached zero), and the postfertile stage in women’s evolved life history. Each of these three traits is “menopause” in their terminology, obscuring the fact that all three are related but very different traits with different evolutionary histories. The puzzle that Morton and colleagues attempt to address is not menopause, but rather the postfertile life span—in other words, why women’s reproductive senescence occurs so long before they die of old age.

This is actually the right evolutionary question, as it is the aspect that is unique to humans. In contrast to other primate species, and despite popular belief to the contrary, women live well beyond their reproductive years across environments and have done so even in the harshest of conditions. The presence of age-related decline in fertility and subsequent cessation of reproductive cycling, on the other hand, is not unique and doesn’t require a human-specific explanation. Despite focusing on the right question, however, Morton and colleagues offer a novel but unlikely theory for the female human’s postfertile life span.

We believe that neither menopause nor postfertile life span originated as a result of mating preferences, especially given other convincing explanations. The grandmother hypothesis and several variants suggest that because human children need extended care, reproductive efforts of older women are more profitably directed toward caring for existing young than producing new babies. However, mammalian reproductive biology also clearly plays a role. Almost all female mammals, if provided a safe environment, show earlier aging of the reproductive system than of the rest of the body. Humans didn’t need to evolve menopause or a postfertile life span from scratch, they just needed to delay nonreproductive aging a bit. Together, the numerous evolutionary forces and biological mechanisms already identified by biologists and anthropologists elegantly explain why all mammals undergo reproductive senescence and a menopause-like cessation of cycling, but only humans and a couple of whale species have postfertile life spans of any ecological importance.

Many of the false assumptions underlying the Morton team’s model are iterations of long-standing misconceptions. Evolutionary theory often ignores some very real biological constraints, assuming that age-specific fertility and mortality schedules can freely evolve; in reality, they are governed largely by trajectories, with what happens at one age affecting other ages. Similarly, treating menopause and a postfertile life stage as the same thing is common in the popular and scientific literature, and the unfortunate myth that older women don’t have sexual partners is also not new.

To be clear, we don’t suspect Morton and colleagues of being anti–older women or ignorant of biology; instead, we believe they have fallen for the great allure and inherent danger of computational biology.

Computational biology allows us to think in ways that would have been impractical not so many years ago. In tandem with molecular biology, it is transforming the way biology is done and the role of biologists in the modern world. While experimentalists must deal with the logistics and expense involved in gathering data, computational biologists can do their work with nothing but fast processors, big displays, elegant models, and beautiful figures. But the ability to bypass the cumbersome steps involved in going out to measure things cuts out some of the reality checks that come from contact with the organisms being described.

So the model presented by Morton et al. is wrong, as Box posited all models are, but is it nonetheless useful? Perhaps. Their false assumptions do not mean that mate preference has had zero effect on the length of human postfertile life span, and indeed, nothing prevents all these theories from operating in concert. A reworked model with more realistic assumptions could quickly show whether the idea is tenable. That possibility of going back and doing it again is another beauty of computational biology.

Daniel Levitis is an assistant professor in the Max-Planck Odense Center on the Biodemography of Aging at the University of Southern Denmark and a member of the board of the Evolutionary Demography Society. Alan Cohen is an assistant professor in the Department of Family Medicine at the University of Sherbrooke in Quebec, Canada. A version of their critique first appeared on the PLOS Computational Biology site as a comment on the Morton et al. paper.