Take some cells from a patient, grow them in a laboratory for a few weeks, and then inject them back into the same patient. That's the basis for autologous cellular therapy, a rapidly developing field that promises to revolutionize the treatment of conditions from cancer to crow's feet.

Growing the cells can be quite labor-intensive, however, because they must be transferred into increasingly larger flasks as they propagate. An Exton, Pa.-based company called Isolagen , which specializes in autologous cellular therapies for tissue regeneration, hopes to improve this process.

About three years ago, scientists and engineers at Isolagen began working on an automated, "closed-loop" system that reduces the need for human intervention. The result is the automated cellular expansion (ACE) system, unveiled at the UBS 2005 Global Pharmaceuticals Conference in May.

"When you grow cells in a laboratory with the traditional methods, you might have 200 to 400 potential sterility breaches," says Isolagen's chairman and interim CEO Frank DeLape. "In the new ACE system, you pretty much eliminate such breaches, except for the interventions at cell initiation and cell harvesting."

Each ACE unit consists of two parts. A permanent component houses the circuitry, the pumps, and a thermoelectric heater. The second part is a disposable unit, which includes a "cell tower" where the cells are grown, plus media bags and a cell separator. According to DeLape, the ACE system should provide a threefold to fourfold improvement in the numbers of cells that can be harvested from a single manufacturing cycle.

Isolagen expects to employ the ACE system for growing fibroblasts, which they use for the "Isolagen Process," a facial rejuvenation therapy currently in use in the United Kingdom and undergoing Phase III clinical trials in the United States, in which a patient's own cells are used to remove wrinkles, scars, or lines.

DeLape says the ACE system will be able to grow a wide variety of cell types. "It may have to be modified a little bit for some of the cellular therapeutic applications that might come on the market in the next 5 to 10 years," he says, "but we certainly believe it will work in stem-cell applications."

Steve Oglesbee, director of the Tissue Culture Facility at the UNC Lineberger Comprehensive Cancer Center at the University of North Carolina in Chapel Hill, says he is intrigued by the ACE system. "It's interesting and a little different from most bioreactors, which typically don't have a three-dimensional surface like the cell tower," Oglesbee says. But as with most bioreactors, Oglesbee imagines that there might be challenges involved when the system is used for other cell types.

Isolagen plans to market the technology as a turnkey service rather than a stand-alone system; the cost was not disclosed. Several scientists interviewed for the article say they have no need to outsource cell production. Nevertheless, Isolagen hopes to have the system in production by the first quarter of 2006, and is betting that as the cell-therapy industry grows, its ACE will trump traditional cell-propagation methods. 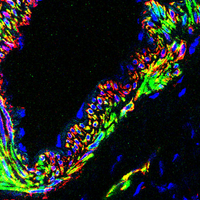