A Channel at Large

The Inner Workings of Hearing Machinery

Downstream of insulin signaling are links to amyloid β (Aβ), the principle peptide that forms the plaques in brains of patients with Alzheimer's disease. It begins with insulin receptor activation turning on the phosphoinositide kinase, PI3K, which generates the lipid messenger, PIP3. PIP3 activates the signaling protein AKT (serine/threonine kinase).

AKT can affect Aβ in two ways. One is that AKT mediates the upregulation of insulin degrading enzyme, IDE, which not only breaks down insulin, but is also thought to degrade Aβ. Conversely, AKT restricts GSK3β, a kinase thought to be involved in stimulating Aβ production. The activation of either pathway can therefore reduce Aβ levels, either by degrading the peptide or inhibiting its production, and defects along these routes might impact the progression of Alzheimer's disease. 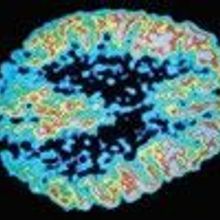