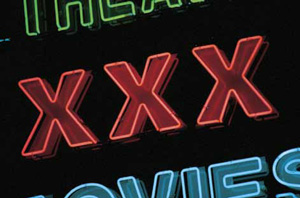 Pornography. Most people have seen it, and have a strong opinion about it. Many of those opinions are negative—some people argue that ready access to pornography disrupts social order, encouraging people to commit rape, sexual assault, and other sex-related crimes. And even if pornography doesn’t trigger a crime, they say, it contributes to the degradation of women. It harms the women who are depicted by pornography, and harms those who do not participate but are encouraged to perform the acts depicted in it by men who are acculturated by it. Many even adamantly believe that pornography should become illegal.

Some feminists even claim that pornography can empower women by loosening them from the shackles of social prudery and restrictions.

But what do the data say? Over the years, many scientists have investigated the link between pornography (considered legal under the First Amendment in the United States unless judged “obscene”) and sex crimes and attitudes towards women. And in every region investigated, researchers have found that as pornography has increased in availability, sex crimes have either decreased or not increased.

Despite the widespread and increasing availability of sexually explicit materials, according to national FBI Department of Justice statistics, the incidence of rape declined markedly from 1975 to 1995. This was particularly seen in the age categories 20–24 and 25–34, the people most likely to use the Internet. The best known of these national studies are those of Berl Kutchinsky, who studied Denmark, Sweden, West Germany, and the United States in the 1970s and 1980s. He showed that for the years from approximately 1964 to 1984, as the amount of pornography increasingly became available, the rate of rapes in these countries either decreased or remained relatively level. Later research has shown parallel findings in every other country examined, including Japan, Croatia, China, Poland, Finland, and the Czech Republic. In the United States there has been a consistent decline in rape over the last 2 decades, and in those countries that allowed for the possession of child pornography, child sex abuse has declined. Significantly, no community in the United States has ever voted to ban adult access to sexually explicit material. The only feature of a community standard that holds is an intolerance for materials in which minors are involved as participants or consumers.

In terms of the use of pornography by sex offenders, the police sometimes suggest that a high percentage of sex offenders are found to have used pornography. This is meaningless, since most men have at some time used pornography. Looking closer, Michael Goldstein and Harold Kant found that rapists were more likely than nonrapists in the prison population to have been punished for looking at pornography while a youngster, while other research has shown that incarcerated nonrapists had seen more pornography, and seen it at an earlier age, than rapists. What does correlate highly with sex offense is a strict, repressive religious upbringing. Richard Green too has reported that both rapists and child molesters use less pornography than a control group of “normal” males.

Now let’s look at attitudes towards women. Studies of men who had seen X-rated movies found that they were significantly more tolerant and accepting of women than those men who didn’t see those movies, and studies by other investigators—female as well as male—essentially found similarly that there was no detectable relationship between the amount of exposure to pornography and any measure of misogynist attitudes. No researcher or critic has found the opposite, that exposure to pornography—by any definition—has had a cause-and-effect relationship towards ill feelings or actions against women. No correlation has even been found between exposure to porn and calloused attitudes toward women.

There is no doubt that some people have claimed to suffer adverse effects from exposure to pornography—just look at testimony from women’s shelters, divorce courts and other venues. But there is no evidence it was the cause of the claimed abuse or harm.

Ultimately, there is no freedom that can’t be and isn’t misused. This can range from the freedom to bear arms to the freedom to bear children (just look at “Octomom”). But it doesn’t mean that the freedom of the majority should be restricted to prevent the abuses of the few. When people transgress into illegal behavior, there are laws to punish them, and those act as a deterrent. In the United States, where one out of every 138 residents is incarcerated, just imagine if pornography were illegal—there’d be more people in prison than out.

Milton Diamond is a professor in the department of anatomy, biochemistry and physiology at the University of Hawaii and director of the Pacific Center for Sex and Society.