Survey Form: A Web-based survey form was posted at www.the-scientist.com from September 8 to November 29, 2010. Results were collected and collated automatically.

Invitations: E-mail invitations were sent to readers of The Scientist and registrants on The Scientist web site who identified themselves as working in commercial or industrial companies.

Analysis: Respondents were asked to assess their working environment according to 43 criteria in 8 different areas by agreeing or disagreeing with a series of positive statements. Answers were scored on a scale of 1–5, with 5 = “Strongly agree”; 1 = “Strongly disagree”; and 3 = “Neither agree...

Identification of Institutions: As far as possible, companies were identified and names were standardized. Companies with multiple locations, including multiple international locations were merged.

Scoring: Scores for each statement were averaged by company.

In addition, we ranked companies based on unweighted average scores for the 8 major topics covered by the statements included in the survey. These categories are:

Results: Results are published in The Scientist, May 2011 issue, and are available on The Scientist Web site at www.the-scientist.com.

Click here to view the questions used in this survey. 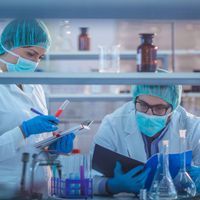