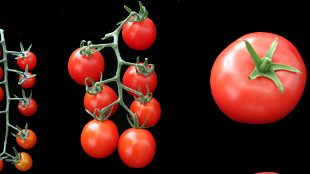 The three evolutionary stages of tomatoes. From the left to right: Solanum pimpinellifolium, S. lycopersicum var. cerasiforme and S. lycopersicum.INSTITUTE OF VEGETABLES AND FLOWERS IN THE CHINESE ACADEMY OF AGRICULTURAL SCIENCES, BEIJING, CHINAThe typical red, modern tomato is about one hundred times bigger than its pea-sized wild ancestor, which originally came from the Andes region in South America. To track the long history of tomato breeding and understand how such human-imposed selection has changed the genome of the plant, an international team of researchers, have sequenced 360 tomato plant varieties, including wild and domesticated species. The results are published today (October 12) in Nature Genetics.

“Two years ago we only had one genome and now we have more than 300!” said Harry Klee, a horticultural scientist at the University of Florida who studies tomatoes and was not involved in the current study. “What makes this work...

The large-scale effort, led by Sanwen Huang of the Institute of Vegetables and Flowers at the Chinese Academy of Agricultural Sciences in Beijing, China, has uncovered a signature of the modern, processing tomato used to make ketchup, a variant that gives some tomato varieties a pink color, and the extra loci introduced to cultivated tomatoes as a result of recent breeding with wild species, among other features of the plant’s genome.

The study builds on the first tomato genome, of the Heinz 1706 inbred, cultivated variety, published in Nature in 2012. For the new work, the researchers sequenced 333 red varieties, 10 wild tomato species, and 17 modern commercial hybrids from around the world.

“One genome sequence is not enough because variation is the raw material needed for breeding,” said Huang, who was part of the 2012 sequencing project. “So we decided to create a variation map for the tomato, which will give breeders a holistic view of the species’ differences.”

“This is an in depth, detailed analysis, providing a resource that will allow more advanced molecular breeding,” said Jeffrey Ross-Ibarra, who studies evolutionary genomics of plants at the University of California Davis and was not involved in the work.

One area that breeders have struggled with is maintaining tomato taste while improving the fruit’s commercial qualities. (See “Opinion: Restoring Tomato Flavor.”) Klee, who studies the chemistry and genetics of tomato flavors and has worked out some of the pathways that synthesize the tomato’s flavor compounds to create better tasting tomatoes for consumers, recently began collaborating with Huang to tease out how human selection has influenced tomato taste. “I want to now go back 100 years and pull out the alleles that will make the modern tomato taste better, to give consumers, rather than the growers and packers, what they want. We want to do a forensic-like analysis of ‘what went wrong with the flavor of the tomato?’”

The current study shows that tomato mass—the trait that has been selected for most—evolved through a two-step process from the small wild tomato to cherry tomato and then to the big-fruit tomato. The study also reveals the genetic differences between large tomato varieties, meant to be eaten fresh, and processing tomatoes such as Heinz 1706. Processing tomatoes are hardier, with a higher amount of solid fruit mass compared with average fresh tomatoes. The researcher identified several genes responsible for this phenotype located on chromosome five, representing a genetic signature of the processing tomato.

About 14 percent of the genome has been selected for during these two rounds of human selection, the genetic data showed. A total of one percent of the genome selected for during the first domestication phase overlap with the loci selected during the 2nd selection round. “This overlap of selected genes demonstrates that loci originally important for domestication thousands of years ago continue to be important for modern tomato breeding,” said Ross-Ibarra. A similar phenomenon occurs in maize as Ross-Ibarra recently showed.

Among the latest modifications to tomato breeds was the integration genes for disease resistance, introduced by crossing wild species, which have retained these genes, with commercially grown species. The current analysis was able to pinpoint the resistance genes as well as molecular markers associated with extraneous loci also introduced during breeding for resistance. This extra genetic baggage has the potential to modify a cultured tomato plant, adding unwanted characteristics into a strain. “As any breeder will tell you, it’s clearly the case that there are many loci that are coming from the wild relative that are not of interest in a domesticated tomato,” said Ross-Iberra. “And with this data, there are now 11 million markers breeders can use to select for a specific locus at high resolution.”

Despite all the important and potentially helpful genetic findings, Klee said he was surprised by the narrowness of the genetic diversity among tomato strains. “There is tremendous phenotypic variation in tomatoes—the fruit, its chemistry, shape, size, color—and yet the sequences have very little DNA variability because the tomato is highly inbred,” he said. “What this tells me is that most of the variation we see in the supermarket and farmer’s market is not genetic, but epigenetic.”

Plant genomicist Joaquín Cañizares Sales of the Institute for Conservation and Improvement of Valencian Agrodiversity (COMAV) in Valencia, Spain emphasized that while sequencing has revolutionized plant genetics and breeding, the wealth of data produced is only a piece of the puzzle—and not enough to understand the biology of these plants. “In this [genomics era] we cannot forget to go to the greenhouses and fields to study tomatoes,” he told The Scientist in an e-mail.